To serve and protect

Baylor's Department of Public Safety (DPS) includes the campus police department as well as fire safety, emergency preparedness, parking and transportation services, and physical security. Furthermore, DPS works regularly with outside agencies such as the Waco Police Department, the McLennan County Sheriff's Office and McLennan County Emergency Management, as well as local fire departments, emergency medical services (EMS), state law enforcement agencies and the FBI. There have been many changes in campus safety and security during the past three years at Baylor. That is the nature of the operation: a constant commitment to improvement. 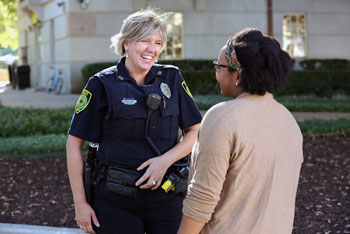 Over the past three years, Baylor University has made a significant investment in leadership, staffing and training in the Department of Public Safety (DPS) to establish a professional public safety operation that pursues excellence in all things.

In spring 2014, Baylor University's Operations and Facilities Division retained Margolis Healy & Associates to conduct an organizational assessment of the University's Police Department and physical security program. The study included an evaluation of all procedures, policies and systems to determine improvements that would ensure a safe and secure campus community while also maintaining an open, inviting and vibrant campus environment. The study resulted in 60 recommendations for improvement, including the creation of the Department of Public Safety in which BUPD, emergency preparedness, technology security, fire safety and parking and transportation would all be combined for better collaboration. The study also pointed to the importance of hiring a full-time, dedicated Title IX Coordinator.

When results of this study were delivered in August 2014, work began immediately on implementation of the recommended improvements.

Mark Childers, associate vice president for public safety and security, joined Baylor University in September 2014 after a 26-year career in federal law enforcement with the U.S. Marshals Service and the U.S. Secret Service, where he supervised protective operations for President George W. Bush and foreign dignitaries. His final operation on Bush's detail served as a transition to his role with Baylor as he oversaw the former president's visit to Waco for the opening game at McLane Stadium.

Also in 2014, Brad Wigtil was promoted to chief of police. Wigtil joined the Baylor police department in August 2012 after 20 years with the University of Houston Department of Public Safety. He also worked for the Houston Police Department.

Safety and security at Baylor is a far-reaching endeavor. DPS staff work everything from bicycle theft to counterterrorism — a stark reminder of how campus-life threats have evolved in the past two decades. To better meet the needs of students, Baylor has added nine additional police officers – bringing the total of commissioned officers to 38 – over the past two years.

During Summer 2016, Baylor officials completed benchmarking trips to Yale University and Virginia Tech, learning from their law enforcement safety programs and comparing their practices and policies. Baylor continues making progress toward its goal of illustrating leadership by example among its peers.

The Baylor University Police Department (BUPD) strives to continuously understand the cares and concerns of the campus community. Wigtil has implemented a program in which officers are required to spend at least 30 minutes each day meeting members of the Baylor community, introducing themselves and asking what they can do to better serve.

Wigtil believes that when you develop a relationship, you develop trust. When there is trust, people feel more comfortable reporting issues, concerns, suspicious activity and suspicious people to the police. Police departments must have great relationships with their communities. BUPD understands communication with the campus community is key in order to serve well.

Feedback from faculty, staff and students regarding the police department's community engagement has been positive.

One challenge encountered by a campus police force that differs from municipal police work is turnover within the community. Roughly one-quarter of the population served by BUPD changes every year as students graduate and new students enter. This turnover requires officers to re-educate the community as the next class of freshmen enter, helping them understand things they can do to maintain their safety.

Baylor DPS has taken numerous steps to improve its operation as a whole. From increased community engagement and increasing its presence in the areas surrounding campus to pursuing accreditation levels with outside organizations. These steps are an outgrowth of the goals of the division.

Baylor is in the process of gaining accreditation from the International Association of Campus Law Enforcement Administrators (IACLEA). The program consists of 214 standards, some of which are optional but departments must comply with 60 percent of even the optional standards. Wigtil and Childers believe IACLEA's guidelines represent the best practices developed by the organization. Baylor has laid the groundwork and is well into the accreditation process.

In addition, Baylor officers are certified by the Texas Commission on Law Enforcement, a regulatory state agency that establishes and enforces standards that ensure the people of Texas are served by highly trained and ethical law enforcement officers and other public servants.

In addition to these efforts, the University has established memorandums of understanding (MOUs) with the Waco Police Department, put together a threat assessment group to better identify threats internally and externally, and strengthened emergency management operations.

Over the past two years, BUPD has established a designated patrol in the neighborhoods surrounding campus. Communication, especially with the Waco Police Department has been key to success. In this partnership, when Waco Police dispatches an officer to an area, BUPD hears the call in real-time. Such calls give BUPD situational awareness for keeping the campus safe. In addition, BUPD responds to these calls. The partnership provides a level of back-up both forces value.

Prior to 2014, Baylor Police used an internal radio system. Childers identified this as ineffective and led efforts to transition to the same system as Waco Police, the McLennan County Sheriff's Office and the Waco Fire Department.

The emphasis on surrounding neighborhoods also includes a crime-free multi-housing program that oversees the sundry apartment complexes, condominiums and rental houses near campus. This initiative involves coordination and cooperation with Waco Police and rental management companies. Certified complexes have about 50 percent lower crime rates than non-certified complexes. But it goes farther than the property itself.

This program is also coordinated with tenant lease agreements. Tenants convicted of a certain level crime will not accept by the management company as a tenant.

Chief Wigtil has a passion for training and for preparing the officers and dispatchers to do their jobs well. The Texas Commission on Law Enforcement requires 40 hours of training every two years. Last year, BUPD averaged 100 hours per officer.

Wigtil also meets weekly with the Title IX Office to share key information. There is a synergy in working together and sharing information to keep Baylor's campus safe.