Three sophomore students gathered around a table in the Title IX Office at Baylor University. With a twinge of apprehension, one woman spoke up. “We’re here because we’re concerned about our roommate. We think she’s in an abusive relationship, and we want her to get help.” 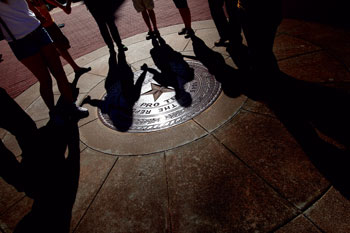 A student employee called his sister after a mandatory campus recreation staff Title IX training at the beginning of the school year. "I know you don't want to tell anyone what happened to you, but I just met the woman you need to talk to."

A Baylor student intervened in the midst of an escalating situation between a friend and his girlfriend. After reporting the incident, a Title IX investigation began less than 24 hours later.

These examples, and others like them, are the result of a rising culture of awareness about healthy relationships and a caring community at Baylor University. Students are reporting concerns about their peers, sharing knowledge about how to get help and safely intervening in potentially violent situations. Throughout the 2015-16 academic year, more members of the Baylor community than ever before stepped forward to report and intervene, in tandem with an increase in prevention training and awareness about Title IX.

This awareness comes with the painful recognition that sexual and gender-based harassment and violence, dating violence, domestic violence and stalking impact our students, both on and off campus. As a Baylor Family, our mission calls us to care for one another and take an active role in preventing and responding to allegations of sexual violence on campus.

Recommendations for improvement of University processes are actively underway. Baylor's Title IX Office, leadership and administration are committed to continuing to adapt to federal mandates and recommendations as a deeper campus understanding of Title IX and the requirements placed on educational institutions continue to take shape and to ensuring the University provides a caring community and safe campus for the entire Baylor Family.

What exactly is Title IX? Why are colleges and universities responsible for investigating such serious crimes as sexual assault and rape?

Part of the Education Amendments of 1972, Title IX is a federal mandate that protects students, employees and third parties from sex discrimination in education programs and activities. The law, overseen by the Office for Civil Rights (OCR) and the Department of Education (DOE), includes directives related to recruitment, admissions, financial assistance, athletics, sex-based harassment and employment.

Throughout the 1980s, the courts interpreted Title IX to include sexual harassment as a form of sex discrimination under Title IX. In April 2011, OCR made it clear that Title IX also applied to sexual assault. Title IX's original intent — to prevent sex-based discrimination and provide access to the civil right of an unencumbered education — broadened, as did the responsibilities of educational institutions. OCR's April 4, 2011, "Dear Colleague" letter offered additional guidance to help clarify compliance with federal legislation. During this time, Baylor University appointed a senior administrator as the Title IX coordinator, which was an acceptable practice under federal recommendations.

In March 2013, the Violence Against Women Reauthorization Act of 2013 was signed into law. The act, which went into effect in March 2014, with final rules implementable as of July 1, 2015, gives institutions official guidelines to follow to prevent and respond to sexual assault, dating violence, domestic violence and stalking — acts that are typically crimes under state law.

In November 2014, Baylor University established a separate office devoted to the coordination of the University's compliance with Title IX. Currently, Baylor's Title IX Office is staffed with a full-time coordinator; a deputy coordinator; two full-time investigators, who are trained in investigating Title IX-related cases and are trauma-informed; a full-time case manager, who is a licensed social worker; a full-time training and prevention specialist; a full-time office manager. In addition, Baylor has hired five external professionals and an outside attorney to work with the Title IX Office. Staff who work directly with students have received trauma-informed training. (Trauma-informed services are influenced by a recognition of the significant impact of trauma on those who experience it and protects against re-traumatization with a consistent sensitivity to the recovery process.)

Intake is the process of sharing a concern with the Title IX Office, allowing the staff to connect the complainant — the individual(s) allegedly subjected to prohibited conduct — with support services. At Baylor, reports are received in a number of ways — from the complainant, the Baylor police department, faculty members, staff members or students reporting for a friend or as witnesses. Once a report is received, the complainant is informed of rights, options and resources and is asked if he or she would be willing to meet with the Title IX Office to talk about safety and success.

An important part of the process is to understand what the student needs and what help they are seeking from the University. The Title IX Office must weigh its obligation to maintain an educational environment free from discrimination and harassment with a complainant's desire to move forward with a complaint. The decision to pursue a report or discuss their story with others is a deeply personal choice made only by the complainant. When a complainant chooses not to pursue a report, the University has resources that are offered to support the student's success and well-being.

For the University to pursue disciplinary action, the respondent — the individual(s) reported to have engaged in prohibited conduct — must be a formal part of the campus community (e.g. faulty, staff, student or volunteer). If the complainant does not want to participate in a formal process, but the Title IX Coordinator determines a campus safety issue is present, the process commences, with or without the active participation of the complainant.

Complainants are provided with the option to contact law enforcement regardless of whether the Title IX Office has jurisdiction to investigate. After reviewing the provided collection of rights, options and resources, complainants can request reasonable support services, interim measures and/or protection. This can include counseling services, academic support resources, psychological assistance, spiritual services, financial aid services and University-issued "Do Not Contact Directives."

The Title IX disciplinary process determines, by a preponderance of evidence (i.e. more likely than not), whether a violation of the University policy, which protects the educational environment as mandated by law, has occurred. If deemed responsible, disciplinary sanction(s) are prescribed. A University's Title IX process is not a trial or a criminal process. It is a University process.

In the criminal justice system, a burden of proof "beyond reasonable doubt" is required to prove guilt of the accused party. The maximum penalty for a convicted crime of aggravated sexual assault is a prison sentence. In contrast, under a university Title IX process, a preponderance of evidence is used to determine responsibility. As Title IX protects the civil right to an education, the most extreme discipline that can be provided by the University upon a finding of responsibility is expulsion of the respondent.

Throughout the disciplinary process, the Title IX Office continues to work with the complainant and the respondent to ensure a fair and equitable process and maintain access to academic opportunity for both parties, unless an interim sanction is instated for the responding party during the investigation.

Nine months before the release of the Pepper Hamilton Findings of Fact, Baylor University's Title IX Office began implementing a robust expansion of training, prevention and awareness opportunities, and requirements for students, faculty and staff.

Throughout Fall 2015 and again in Fall 2016, more than 4,000 incoming students participated in mandatory prevention and awareness training. All student workers, including tutors and orientation, Line Camp and community leaders, are trained annually on the scope of their reporting requirements. Staff and faculty, including graduate students with teaching responsibilities and study abroad faculty, are annually trained in prevention and mandatory reporting.

Intervention is a proven method that works within peer groups to begin to change a culture. Anecdotal evidence suggests that Baylor students are applying both direct and indirect bystander intervention methods in their social circles.

Education is a critical step in shifting campus awareness. In order to change campus culture, Baylor is informing students about Title IX, the purpose of the Title IX Office and Baylor University's policy regarding sexual and gender-based harassment and violence, dating violence, domestic violence and stalking. Students and student groups are being empowered with tools and resources to transform the culture within their peer groups and the University more broadly.

However, culture does not change overnight. Research indicates that culture in a college setting shifts every two years. Baylor's Title IX Office continually assesses the unique needs and trends among students in order to adapt trainings and messaging to best support a culture of care and healthy relationships.