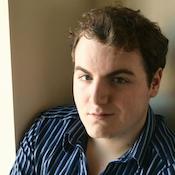 Lucas Skjaret (he/him) is an M.F.A. Theatre Directing candidate and comes to Baylor University from Minneapolis, Minnesota. Before his journey south, he worked as a director, costume designer, dramaturg, and teaching artist in the Twin Cities. Lucas was also the founder and artistic director of Market Garden Theatre, in which he directed Another Revolution, My Barking Dog, On The Exhale, and Public Exposure, as well as curated and directed their new works festival, Fresh Roots. He also worked with companies such as Lyric Arts Main Street Stage, Freshwater Theatre, Little Lifeboats, The Children's Theatre Company, Park Square Theatre, Artistry, Teater Neuf in Oslo Norway, and others. Lucas received his double B.A. in Theatre Arts and Scandinavian Studies from The University of North Dakota and studied at The Ibsen Centre at The University of Oslo. Lucas is an alumnus of the Directors Lab North in Toronto, Canada, and was an artistic intern at The Playwrights' Center under Jeremy Cohen. He is a proud associate member with The Society of Directors and Choreographers as well as a member of The Literary Managers & Dramaturgs of North America and The Ibsen Society of America. www.lucasskjaret.com