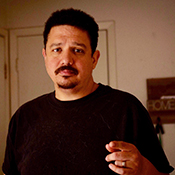 Edward is pursuing his MFA in Directing at Baylor University. He received his BFA in Directing from Texas State University before returning to his home town, San Antonio. Edward has worked with most theatres in San Antonio in some form or another. As a company member at the Overtime Theater, Edward directed several shows each season in addition to writing 5 full length plays and several one-acts and short film scripts. Prior to beginning his studies at Baylor, Edward was a Middle School Theatre Teacher and has been a guest clinician for after school arts programs and UIL workshops.