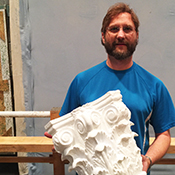 Michael Sullivan is an assistant professor in the Department of Theatre Arts at Baylor University. He previously served on the faculty of the University of North Texas Theatre Arts Department and the University of Oklahoma School of Drama. Professor Sullivan is an active professional set designer, and has worked extensively with a variety of production companies, such as the WaterTower Theatre, Kitchen Dog Theatre, Stage West, Circle Theatre, The Huntington Theatre, The Adirondack Theatre Festival, and the Pollard Theatre.

In university settings he has designed for the University of North Texas Opera and the University of Oklahoma School of Dance, School of Drama, and School of Musical Theatre. Most recently he has designed for Shakespeare Dallas with The Merry Wives of Windsor, the world premiere of Quixote, and The Tempest. He was the last assistant to William Eckart, the Broadway veteran designer on several productions including the world premiere of Three Coins in the Fountain at the Saint Louis Muny.