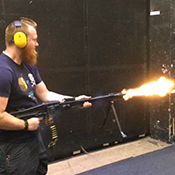 Originally hailing from Strawberry Junction, Texas, Jordan Rousseau received his MFA in Technical Production from the University of North Carolina at Chapel Hill, and his BA in Oral Communication/Theatre from Harding University in Searcy, Arkansas. He is a Technical Director in charge of behind-the-scenes safety, logistics, and construction. He is also the Head of Properties, and can be found whittling away his time in the basement on various animal puppets and fine furniture.

Jordan's experience includes working for the National Theatre in London, The Royal Shakespeare Company in Stratford-upon-Avon, PlayMaker’s Repertory Company (LORT D), The Virginia Shakespeare Festival, Illumination Fireworks, The University of North Carolina at Chapel Hill, Creative Pyrotechnics, The Carrboro Arts Festival, Creative Visions, Searcy Summer Dinner Theatre, Waco’s Children Theatre, as well as many consultant jobs for various high schools and theatre companies. Some of his favorite projects have included special properties construction for The Tempest and technical director for the summer rep stage for Shakespeare Dallas, design and creation of the deer for the world premiere of Deer at Stage West, special effects fabrication for Common and Barbershop Chronicles at the National Theatre, and set carpenter for the world premiere of Miss Littlewood at the Royal Shakespeare Company.

Jordan has extensive rigging and automation experience, and holds rope access certifications from IRATA and SPRAT.

Jordan is also a licensed pyro-technician and special effects operator. He loves blowing things up and setting himself on fire. You can often see him on the sidelines at Baylor football and basketball games getting ready to make a spectacle. He also enjoys working with his colleagues in film, and his special effects and stunt work can be seen in films such as My Dinner with Werner, and Blur Circle.

Jordan specializes in props construction, metal fabrication, rigging, special effects, and CNC operations. Jordan is happily married to Kaity Briscoe, who works as the Fine Arts-LLC Program Director for Baylor. They are the proud parents of two rescue dogs — .22 and Kimber.