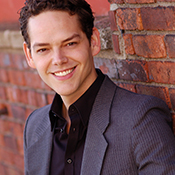 John-Michael Marrs is an assistant professor of acting in Baylor University's Department of Theatre Arts. He teaches courses in audition technique and the business of acting, period styles of performance, realism, Viewpoints, and the intersections of Christianity and Western Theatre. Additionally, he is a faculty member in the Baylor Interdisciplinary Core. John-Michael received his Master of Fine Arts in Acting from the University of Alabama/Alabama Shakespeare Festival, and is a proud alumnus of Baylor University, where he earned his Bachelor of Arts in Theatre.

John-Michael has trained and devised work with Anne Bogart and the SITI Company and is a certified actor combatant with the Society of American Fight Directors. John-Michael is a member of Actors' Equity Association. In addition to his theatrical pursuits, he has worked in both recruitment and development with the New York Conservatory for Dramatic Arts and Yale University, respectively.