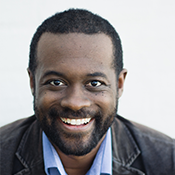 Sam Henderson is a Lecturer of Theatre and Film who teaches Acting 1, Acting for the Camera, Introduction to Theatre, Short Film Production and Acting for (Film) Directors. He received his Bachelor of Fine Arts in Theatre Performance from Baylor University and his Master of Fine Arts in Acting from The Old Globe Professional Actor Training Program through the University of San Diego. At The Old Globe, Sam appeared in numerous productions, including Much Ado About Nothing, Romeo and Juliet, Hamlet, Pericles, Marat/Sade and as Vanya in Uncle Vanya. Sam also wrote, directed and performed his one-man show, The Man with the Horn, about the life of Miles Davis, as his thesis production.

As a professional actor, Sam has appeared in Romeo and Juliet and as Martin Luther King Jr. in The Mountaintop, both at the Tony-award winning (2017) Dallas Theater Center, and was set to appear in Dominic Morrisseau’s Pipeline in Spring 2020 also at DTC. Also in the DFW area, Sam performed in the Regional Premiere of Under the Skin, winner of the DFW Critics’ Choice Award for Best Ensemble, at Circle Theatre; August Wilson’s Two Trains Running at the oldest running African-American theatre in North Texas, Jubilee Theatre; Hillary and Clinton  by Lucan Hnath and Lynn Nottage’s Mlima’s Tale at Second Thought Theatre; as Coach Jones in King Liz at Amphibian Stage Productions, and as Torvald in A Doll’s House at WaterTower Theatre, directed by Joanie Schultz.

On screen, Sam is a SAG-eligible performer who has appeared in numerous short films and in print ads and commercials for FedEx and Bestway, respectively. Sam can also be seen in Baylor FDM Professor Chris Hansen’s award-winning feature film, Blur Circle, and in the LA Film Festival Best Picture nominee, A Country Called Home, produced by Nicolas Gonda (Tree of Life, To the Wonder) and starring Imogen Poots (28 Weeks Later, Knight of Cups).

Sam is an award-winning film director and writer and co-founder of the filmmaking venture, 4amtentrevial, whose most recent short film, Con Alma, premiered at the Oscar-qualifying, RSF Martha’s Vineyard African American Film Festival and went on to become an official selection at the Oscar-qualifying St. Louis International Film Festival, as well. Con Alma was also a finalist for both the WeScreenplay Diverse Voices competition and The Monthly Film Festival for which it won third place. 4am’s first film,  Nicky, premiered at the New Haven International Film Festival. Nicky was the winner of “The Outside Pickett Award” for Most Original at the inaugural Prison City Film Festival in Hunstville, Texas and was also a five-time nominee at the Austin Revolution Film Festival, including Best Texas Short, Best Director, Best Actor, Script to Screen and Best Texas Script, winning a special citation for “Most Inspirational.”  In 2018, it made its California premiere at the Idyllwild International Festival of Cinema, where it was nominated for Best Short, Best Director, Best Screenplay, Best Actor and Best Editing.  In 2015, 4am’s first adapted short screenplay, Willow Weep for Me, was the winner of numerous awards, including an Official Selection for the prestigious Magwill International Screenplay competition and a top-ten finalist at the inaugural Cannes Short Screenplay Contest.

In 2016, Sam made his first foray into television writing, winning the Cine Pitchfest, Sponsored by the A+E Network, with the teleplay, The Walls.  A community drama set in 90s-Huntsville, Texas, The Walls won a direct pitch to the Director of Scripted Programming in the spring of 2017 and is currently seeking representation.

As a professional musician, Sam’s drumming can be heard on various jazz and CCM recordings and as an occasional member of the pit for a Baylor University Theatre musical performance. As a bandleader, Sam’s band’s first EP, Meet ColorBox, can be found on iTunes and Apple Music.

Sam is a proud member of the Actors’ Equity Association.