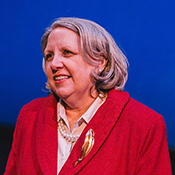 Lisa Denman received her Bachelor of Arts in Theatre from Abilene Christian University and her Master of Fine Arts in Theatre Directing from Baylor University. She stays busy within the department through directing, teaching classes, and acting as student adviser and recruitment coordinator. Ms. Denman has also taught at McLennan Community College and has directed several productions throughout the Central Texas Area. She has been a member of the Board of Directors of Dallas's acclaimed Second Thought Theatre since its inception.

Lisa Denman directed the original play God & Mammon at the Ensemble Studio Theatre's Octoberfest in 2005. She has directed three different stagings of Craig Wright's new work The Unseen, beginning with the Texas Premiere at WaterTower Theatre's Out of the Loop Festival in 2008. In March of 2009, she and the American Actors Company took the show to New York City for its Off-Broadway Premiere at the Cherry Lane Theatre. The group restaged the show once more for Baylor Theatre's 2009 Horton Foote Festival.