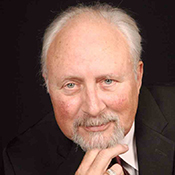 Professor Marion Castleberry joined the Baylor Department of Theatre Arts in 2001. He teaches graduate courses in directing, text analysis, research and writing, and performance theory. He holds a Doctor of Philosophy in Theatre and Film Studies from Louisiana State University.

Dr. Castleberry has directed two hundred productions in professional, educational and religious venues and he has received several awards for his work including a Drama Desk nomination for his production of Horton Foote’s The Traveling Lady, performed at the Ensemble Studio Theatre in 2006.

Throughout his career, Castleberry has promoted theatre education in the schools.  He has served as President of the Texas Educational Theatre Association Adjudicator’s Organization, President/CEO of the Texas Educational Theatre Association, and University Interscholastic League One-Act Play Adjudicator.  He was named College/University Theatre Teacher of the Year in 2011 and received the prestigious Founders Award in 2017 for his exceptional contribution to TETA and educational theatre in Texas.

Castleberry and his wife, Terri, are founders of Messengers Through Christ, a production company dedicated to fostering new works based on biblical stories and significant people of faith. They are currently touring No Panic in Heaven: A Conversation with Corrie ten Boom, written by Terri Castleberry.