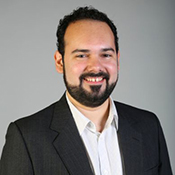 Guilherme Feitosa de Almeida, pianist, conductor, and teaching artist, a native Brazilian, completed his Master in Music at Baylor University in 2008. He earned a Bachelor in Sacred Music with emphasis in Composition at the Seminário Teológico Batista do Norte do Brasil in Recife (Brazil) in 2005.

A much sought after music director, performer, liturgist, and consultant, Prof. Almeida is immersed in storytelling, spirituality and the arts, transformational education, and social justice.

He has presented at the Goiânia Opera Festival (Vocal Music of the Baroque - Performance Practices), at the Political Theology Network (A Canção do Senhor na Terra Brasileira - Liturgies of Resistance), at the Baptist International Conference on Theological Education (TogetHEr: Re-imagining, Re-reading HERstory in the Church). Lately, he has led worship for the Baptist World Alliance Annual Gatherings (2017 - Thailand, 2018 - Switzerland, 2019 - The Bahamas).

Recently Prof. Almeida joined the 2020 cohort of CAS Creation & Scenario in Music at the Zurich University of the Arts where he will study and craft contemporary practices of communication and collaboration involving Theatre (Direction, Scenography), Music (Composition, Performance, Conducting), and Technology (Sound Design and Sound Architecture).

Upcoming projects include: Composer and Music Director for Yerma at Baylor Theatre, and Composer for a new production/translation of Goethe's Faust with Director Raphael Parry at the University of Texas - Dallas.

Guilherme is currently represented by the Harwood Management Group, Inc.