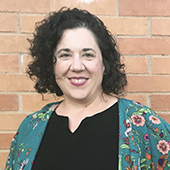 DeAnna Toten Beard, MFA, PhD is Professor of Theatre History and teaches a variety of theatre studies courses at the undergraduate and graduate level. Dr. Toten Beard joined the Baylor faculty in 2002. In 2012, she was named a Baylor Teaching Fellow. Dr. Toten Beard has also taught in the Baylor Interdisciplinary Core and is currently co-director of the Baylor in Oxford study abroad program.

Dr. Toten Beard is an active historian with research interests in early twentieth century U.S. theatre and drama. Her specializations include American expressionism, modernist theatre design, and depictions of World War I on the American stage. Among her publications are “The Little Theatre Movement” in  The Companion to American Literature (2020); “Inspiration and Atmosphere in Getting Together A War Play: Stage Authenticity and the WWI Soldier on the Broadway Stage” in Theatre Annual (2015);  "Performance, Preparedness, and Playing with Fire: Major General O'Ryan and U.S. Military Theatricality in the World War I Era" in Public Theatre and Theatre Publics (2012); “Artisan to Artist: The Impact of Gallery Exhibitions of New Stagecraft in the U.S., 1914-1919” in New England Theatre Journal  (2007); and "American Experimentalism, American Expressionism, and Early O'Neill" in A Cambridge Companion to Twentieth-Century American Drama (2005).  She is the author of the monograph, Sheldon Cheney’s Theatre Arts Magazine: Promoting a Modern American Theatre, 1916-1921 (2009). Dr. Toten Beard is also the editor of The Texas Theatre Journal, published annually by the Texas Educational Theatre Association.

Her artistic work includes directing for the stage, including Sister Suffragettes (2020), Who Am I This Time (2017), The Underpants (2015), Quartet with Grand Piano (2012), and God and Mammon (2005) which she also authored. Thanks to close collaborators in the Baylor Film and Digital Media department, Dr. Toten Beard has also appeared in several independent films including Age of Bryce directed by Brian Elliott and David Feagan for which she won Best Comic Actress at the Garden State Film Festival (2020) and Best Actor (Female) at the On the Bearch International Film Festival in Bulgaria (2020).

DeAnna Toten Beard earned a Doctor of Philosophy in Theatre History, Literature, and Criticism from Indiana University, a Master of Fine Arts in Dramaturgy from Stony Brook University, and a Bachelor of Arts in Theatre and English Literature from the University of Mary Washington.