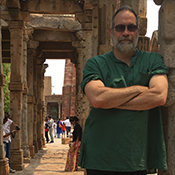 As a director, Stan has directed approximately 35 productions at Baylor and beyond, including productions of THE ORESTEIA, ROMEO AND JULIET, THE CAUCASIAN CHALK CIRCLE, NOISES OFF, THE SHAPE OF THINGS, URINETOWN, THE MUSICAL, ANNA IN THE TROPICS, LEGALLY BLONDE, and APPROPRIATE.

As an actor, Stan has performed in numerous productions, and made his Off-Broadway debut in 2006 in Horton Foote's THE TRAVELING LADY (Drama Desk Nomination for Outstanding Revival of a Play) in the role of Slim. In 2008, he played the role of Valdez in a critically acclaimed production of Craig Wright's drama THE UNSEEN at the Out-of-the-Loop Festival in Dallas, Texas.

In March of 2009, Stan went on to play the role of Valdez in the Off-Broadway premiere of THE UNSEEN at the historic Cherry Lane Theatre with playwright Craig Wright making "tweaks" to the script especially for this production.

Regionally, in May of 2014 Stan originated the role of Edwin M. Stanton in Steve Walters' gripping historical drama BOOTH at Second Thought Theatre in Dallas, Texas. BOOTH was recognized by several critics as one of the best new plays generated in DFW in 2014 and Mother Jones recognized Stan's portrayal of Stanton as one of the "great performances" of the year. And in October of 2017 he performed the role of Judge Roan/The Old Confederate Soldier in PARADE at Water Tower Theatre in Addison. Stan is a member of the Actors Equity Association.

As a playwright, Stan's play EMBRACING received its professional world premiere at Stage West in Fort Worth, Texas in 2006. A much-revised subsequent version of EMBRACING won one of three coveted spots in the 2007 Richard and Betty Burdick Play Reading Series at Florida Studio Theatre.

Dr. Denman's area of interest in traditional scholarly research lies at the intersection of conservative Protestant Christianity and the theatre. In the year 2000, Dr. Denman was one of three Americans invited to sit on a fifteen-member panel of international scholars in Perpignan, France to discuss regional identity and the arts from a global perspective. In 2004 his research article "Political Playing for the Soul of the American South: Theatre and the Maintenance of Cultural Hegemony in the American Bible Belt," appeared in The Southern Quarterly.

As an educator, Dr. Denman has taught some two dozen different courses on both graduate and undergraduate levels during his tenure at Baylor University, ranging from acting to theatre history, and playwriting to dramatic theory and criticism. In the year 2000, he was name the College/University Educator of the Year by the Texas Educational Theatre Association.

Stan is also very interested in world travel and is the current director of the Baylor Theatre Abroad program which began in the summer of 2008. Traveling in even-numbered summers for almost a month abroad, the program has taken dozens of theatre majors to see great theatre and have the time of their lives in England, France, Belgium, Italy, and Greece. Most recently, Dr. Denman has also begun an initiative with Christ University in Bangalore, India to help create cultural exchange experiences with young Indian artists on the other side of the globe.

The summer of 2017 saw Stan, three additional faculty/staff and 18 Baylor Theatre majors traveling across India for a rich cultural experience of performing with our Indian colleagues and touring throughout the country. Appropriately titled "East Meets West," this performance and tour allows one more place for Baylor Theatre majors to move beyond Waco and have a worldwide impact.