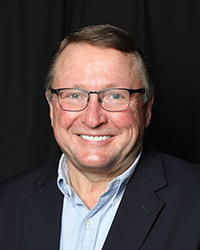 A veteran journalist with more than three decades in broadcasting, Bruce Gietzen became the Director of Student Media in 2017.  He now oversees all Baylor student publications, including the Lariat student newspaper, website and digital platforms, Lariat TV News and radio, the Roundup yearbook and Focus magazine.  He has also been an adjunct professor and is helping create a broadcast curriculum for the department.

In his 33 years as a television journalist Gietzen worked in Wichita Falls, Salt Lake City, Houston and Waco.  The first 20 of those years he was a sportscaster covering memorable games and events including the 1979 Final Four with Magic Johnson and Larry Bird, the University of Houston’s Phi Slama Jama team featuring Akeem Olajuwon and Clyde Drexler, NBA World Championships for the Houston Rockets, and no-hitters by Houston Astros Nolan Ryan and Mike Scott.

For seven of those years, Bruce was part of the broadcast team for the Rockets and Astros, and also was a contributing reporter for ESPN, Major League Baseball productions and NBA Entertainment.

A native of Fort Worth, Gietzen also worked in Atlanta and Washington D.C. marketing for sports and special events, and he was a partner in a nationwide event management company in the Dallas area.

In 2003 he returned to broadcasting at KXXV-TV, the ABC affiliate in Waco.  For 13 years there he anchored the nightly news, and also served as the 10 p.m. managing editor covering major stories such as the Fort Hood mass shootings and the deadly fertilizer plant explosion in West, Texas.

Now he enjoys the rewards from teaching and mentoring aspiring young journalists, helping them find their passion and prepare for a successful career.

“We ask our students two questions every day,” Gietzen said.  “Number one, did we get the story right?  And number two, is it a story our readers and viewers will care about?  When our students do that, we are on the right path.”