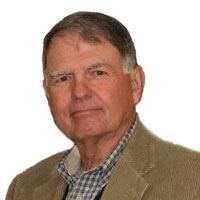 After an exciting high school experience in Fort Worth, physics sounded interesting to me but I kept taking these easy math courses instead at UT Arlington. Since no one offered me a job after graduation (well I never asked for one), I thought about graduate studies in mathematics. However, they offered more money to study statistics at SMU, so why not. Upon completing an MS degree, I went to Sandia National Labs in Albuquerque with a Q clearance (an "if I tell you, I would have to kill you" type of deal). There, these Ph.D.s kept telling me what to do so I decided to get one of those Ph.D. my own self and did. When offered a position with the Raging Cajuns of the University of Louisiana in Lafayette, the Crawfish Capitol of the World, how could I refuse? We started a Ph.D. Program in Statistics and a new Louisiana Chapter of the American Statistical Association. Not wanting to be buried in the swamps, I returned to Central Texas and Baylor. Here I was a primary organizer of the Conference of Texas Statisticians. Baylor hosted the 30th such Conference in Spring 2010. Then we began this Ph.D. program in Statistics which I have directed for 20 years. Currently I dwell in the hills of Bosque County with the goats, donkeys, cattle, and coyotes.