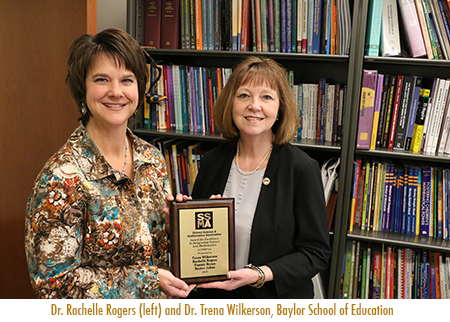 Baylor's GEAR UP Mathematics Initiative, developed by professors in Baylor's School of Education (SOE) and Math Department, received a national award in October. The School Science and Mathematics Association (SSMA) presented the Baylor collaborators with the Award for Excellence in Integrating Science and Mathematics.
Dr. Trena Wilkerson, Professor of Curriculum and Instruction and Graduate Program Director in the Department of Curriculum and Instruction in the School of Education, served as director of the GEAR UP Math Initiative.
Baylor and the School of Education have been involved in the GEAR UP project -- a grant-funded program designed to prepare students, beginning in middle school, for higher education -- since 1999. The latest phase of the grant was originally funded for 2006-2012, with $11.3 million from the U.S. Department of Education. The grant was then extended into 2013. GEAR UP stands for "Gaining Early Awareness and Readiness for Undergraduate Programs."
Baylor freshman Denise Anderson is one of five GEAR UP Waco-area alumni who are enrolled at Baylor now. The freshman psychology major said, "GEAR UP really inspired me to do something with my life. A lot of potential is wasted because people don't have opportunity, and I was blessed to have this opportunity." Anderson said she did not have parental or peer support for attending college and that without GEAR UP, she never would have considered it.
For middle-grade students, the GEAR UP Math Initiative programs provide a link between math and activities they love. Students rode rides at Six Flags wearing special vests that measured g-factor, acceleration, and heart rate and then analyzed the data. They learned how to use math to determine the pitch of a musical note and then play a song. And on a trip to a skate park, students learned to calculate acceleration and velocity. Other math field trips took students to museums, stadiums, archeological sites, and a zoo.
Anderson said the field trips through GEAR UP opened her eyes about the possibilities for her life. "I had no idea the world was such a big place," she said.
Wilkerson said the GEAR UP Math Initiative included professional development for classroom teachers, Math Super Saturdays for students, a summer math camp for students, and a summer teacher institute. Throughout the project, Baylor professors collected data about the success of the students in the program.
The GEAR UP program involved seven middle schools and four high schools for a total of 502 participant students, Wilkerson said. Researchers collected data from a once-a-year math inventory taken by participants and control students, a "math level indicator" assessment once a year, standardized test scores, and course grades from algebra and geometry classes.
"The number of hours in the GEAR UP Math Initiative had a significant effect on math TAKS scores and course grades," Wilkerson said. "Over the years, the more hours the students spent in the GEAR UP Math Initiative activities, the more likely the student was to score higher."
SSMA presents the Award for Excellence in Integrating Science and Mathematics to a group that has "fostered, promoted, and extended the integration of mathematics/science." The winners must be actively involved in the educational field in the development of curricula. The Baylor group received the award at the 2013 SSMA convention and also gave a presentation about their work.
Other GEAR UP Math Initiative team members included
• Dr. Rachelle Rogers, Clinical Assistant Professor in Middle School Mathematics Education in the School of Education's Department of Curriculum and Instruction
• Dr. Tommy Bryan, Senior Lecturer in the Department of Mathematics in the College of Arts and Sciences
• Dr. Baxter Johns, Professor and Undergraduate Program Director in the Department of Mathematics
• Dr. Truell Hyde, Baylor Vice Provost for Research, Lead Principal investigator
• More than 20 graduate students in the School of Education, including Dittika Gupta, Patty Nelson, and Sarah Jane Haugh. --Meg Cullar
Are you looking for more News?
All NewsArchives