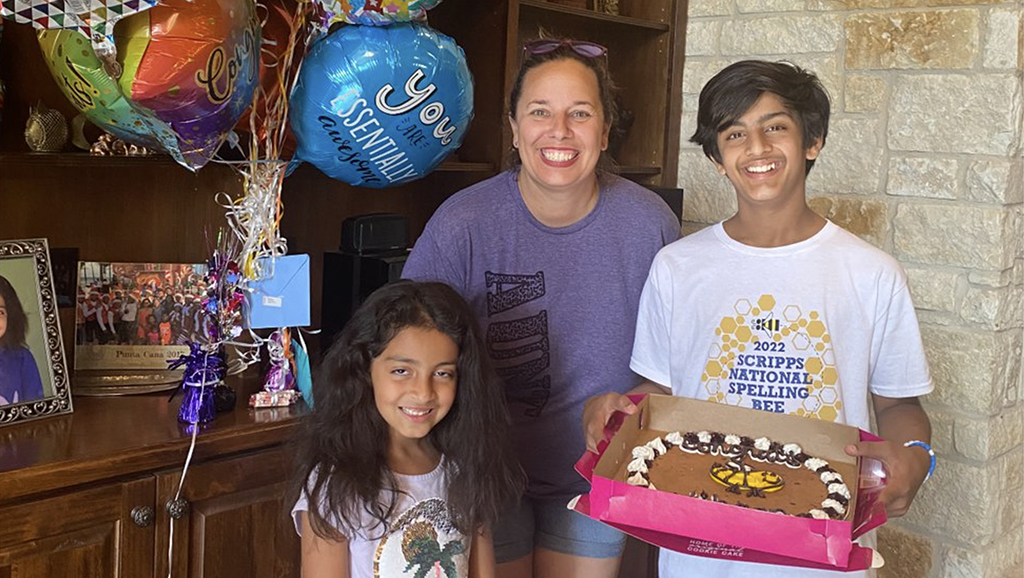 It’s a national award that no ordinary teacher can obtain. The Scripps National Spelling Bee honors only one educator annually with the Teacher of the Year award, and Baylor School of Education graduate April Dean McAdams, BSEd ’00, is the 2022 recipient. A 22-year teaching veteran, McAdams has been mentoring spellers in Midway ISD for several years. After a nomination from one of her successful students, McAdams “w-o-n” this year’s honor. 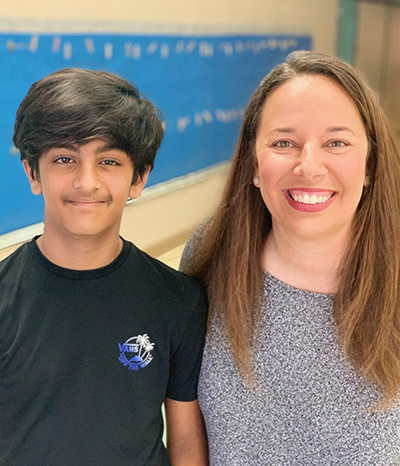 Vihaan Sibal (with McAdams, at right and above), the Midway ISD student who placed third in this year’s Scripps National Spelling Bee, credited McAdams for his success and for sparking his interest for spelling. This was Vihann’s fourth year to compete, and his nomination led to the nationwide recognition for the third-grade South Bosque Elementary School teacher. After his win, Vihaan took to the stage at a banquet in National Harbor, Maryland, to accept the award on McAdams’ behalf.

For the past five years, McAdams has been the Midway ISD spelling bee coordinator. The teacher-student bond with Vihaan developed in her third-grade class when they found their common passion for spelling. From there, she has supported him every step of the way and attended his first year at nationals in Washington D.C.

“He’s a natural. He's unbelievable,” McAdams said. “It's been a connection through spelling and mentoring. It's just one of those unexplainable bonds.”

McAdams’ interest in spelling also developed from a young age and continued to blossom into adulthood. She grew up attending UIL spelling competitions and continued competing throughout high school. With her mother by her side as her coach, she became a state-level spelling competitor. With such a long-time passion for spelling and helping students, she said this award “means everything.”

“Out of all the awards I could receive, this is it. Spelling is my passion, and it has been ever since I was a kid,” she explained. “It came as a total shock to me. Vihaan has made all the difference in my career as of right now.”

McAdam’s teaching career path started at Baylor University. A 2000 graduate, she earned certification in elementary education through the Baylor School of Education and thinks fondly of her time as a student.

“I had wanted to go to Baylor my entire life. It was the only school I ever considered,” McAdams said. “The professors really took a general interest in me and what I wanted to do. I just think the interest that they take in their students — in their lives outside of just the classroom — is what made a real difference for me.”

After graduation, she began her first teaching job in Penelope, Texas. From there, she taught in Clifton ISD, Waco ISD, and has been working in Midway ISD for the past six years. McAdams has also been a mentor teacher to Baylor SOE student teachers. As a mentor teacher, she hosts senior-level Baylor education teachers in her classroom to teach alongside her for a year. McAdams said she loves the mentoring experience and enjoys keeping in touch with her former student teachers.

“I am living my dream job,” she said. 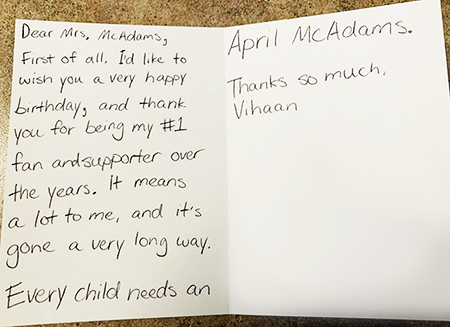 As part of winning the title “Teacher of the Year” for the Scripps National Spelling Bee, McAdams received a plaque, $500 dollars, an airline ticket, and a four-night stay at the Gaylord National Resort for next year’s spelling bee. She plans to go to Washington, D.C., to accept her award in person next year, which will also be the last year Vihaan is eligible to compete in the spelling bee. But McAdams continues to mentor Midway students and hopes to coach another champion speller.

“I think it's an amazing experience for kids. I don't know of any other educational organization that does what they do,” McAdams said of the Scripps program. “There are lots of different kids from all over, and they become lifelong friends. It's just really a neat thing for students and teachers to experience.”

• Watch the news story on KWTX-TV