Traniece Brown-Warrens — an assistant principle in Oregon and Baylor EdD candidate in K-12 Leadership — takes quite a journey several time a semester to attend weekend classes with her EdD cohort on the Baylor campus. But she sees her life trajectory as a series of journeys. Born in Sacramento, Calif., she’s lived all over the world and filled many different roles as a school leader.

After being the first person in her family to graduate high school, she studied in Alabama, Tennessee, and Europe for collegiate education before obtaining a degree in psychology from Sacramento State University. She went on to get a master’s degree in school counseling from Liberty University.

“I made a lot of mistakes. I have the financial aid and loan debt to prove it,” Brown-Warrens said. “I told myself that I wanted to be somebody that taught kids that were in similar situations as mine how not to get caught up like that.” 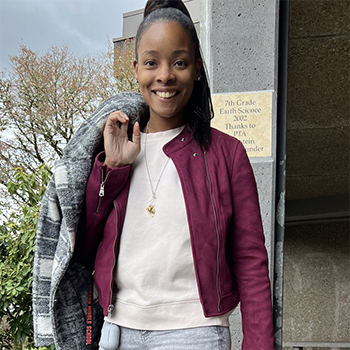 Her dream was to become a school counselor, but she first found a teaching position in elementary special education, which she said was a great foundation for her career.

“I learned how to deal and interact and communicate and connect with students who are struggling in those areas, sometimes are misunderstood. And so I learned that not all reactions were bad; a lot of it was them trying to communicate.,” Brown-Warrens said.

After her introductory position, Brown-Warrens decided she wanted to teach eighth-grade U.S. history, so she only applied for those jobs. She knew this was a risky move and said that no matter how many interviews she had, she was never taken seriously because of her small stature.

After many refusals, she still heard a “what if” from God in her soul. At yet another job fair, Brown-Warrens was on the verge of accepting a different position when she saw a table for eighth-grade U.S. history. She interviewed on the spot and landed a model lesson for the next day. Her hard work and persistence paid off, as she was awarded the position teaching in Texas.

Brown-Warrens said she tried to be the teacher who didn’t mind saying “yes.” She also became known as the hip-hop teacher, infusing culture with the curriculum to get students to “fall in love with the U.S. constitution and to fall in love with history that really didn’t represent them.” In 2017, she won the Humanities Texas Award for Outstanding Early-Career Teaching. 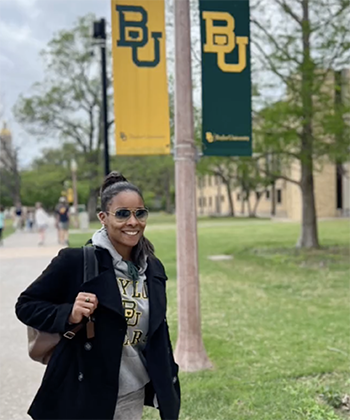 After several years as a teacher and filling roles in district offices, Brown-Warrens moved to Portland, Oregon, to fulfill her dream of becoming a school counselor, only to realize that it wasn’t the dream job she imagined. Next she took on her current role as assistant principal at Jackson Middle School in Portland, Oregon.

Outside of the classroom, Brown-Warrens has also pursued athletic interests far and wide, playing basketball in Coventry, England, and spending time in Australia. She now enjoys being a football and basketball coach at her school.

And she said that Baylor’s sports were a draw and a driving factor in her love for the University.

“Baylor women’s basketball team … as a girl growing up, watching Baylor dominate the way they did, there was nothing like watching them play,” Brown-Warrens said. “And then football … RGIII was a beast on the football field.”

Meeting EdD program director Dr. Bradley Carpenter through a Twitter interaction was the real linchpin in her decision. She said Carpenter’s focus on the mental health and wellness of educators through mindfulness and meditation struck a chord with her, and she began attending his weekly Zoom sessions dubbed “Live Well, Love Well, Lead Well,”

When Carpenter approached Brown-Warrens about the possibility of joining Baylor’s executive EdD in K-12 Leadership program, she was apprehensive at first, believing she may not be good enough. However, after some convincing, she went through with the application.

Brown-Warrens said that she never saw herself obtaining a doctoral degree, because her dyslexia meant she had to work hard. She credits her mom and family as the driving force in her motivation for success.

Brown-Warrens said that she has grown as a Christian, a leader, and a woman since joining the program.

“Now I’m seeing how to actually impact change in a way that I knew needed to be changed, but I just didn’t know how to do it,” she said.

To hear Traniece's story in her own words, listen to this “MEET THE SOE” podcast: