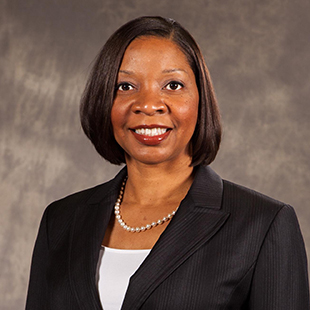 According to Merriam-Webster dictionary, diversity means “having many different forms, types, ideas, and people,” and as the new chief diversity officer for Hendrix College, Dr. Dionne Jackson is taking this important concept and making it a reality across her campus.

Jackson, EdD ’10, became the first chief diversity officer at Hendrix College, located in Conway, Arkansas, on July 1, 2016. Jackson said her role is different from anything she has done before.

Before becoming chief diversity officer, Jackson was chair of the college’s education department, after several years as an associate professor in education, beginning in 2010. Jackson also was an adjunct professor in the department from 2002-2007. Before that, she was a science teacher at Mann Magnet Junior High in Little Rock, Arkansas.

As chief diversity officer, Jackson manages strategic and policy planning. Through these two areas, Jackson works with vice presidents from across campus to discuss and address different ideas and programs from students and faculty. Jackson also works with Aspire Scholars, a new program to assist students with high financial need who are first-generation college students. With all the ideas and opportunities that come her way, Jackson’s biggest challenge is prioritizing the many great ideas, she said.

"No two days look the same. When students come back on campus, I am busy helping with move-in, meeting new families of students, and working with the admissions office or student and academic affairs,” Jackson said.

Jackson credited her successful adjustment to the experiences she had while at Baylor School of Education earning a EdD in curriculum and instruction.

“My experience at Baylor and in the School of Education was phenomenal,” Jackson said. “From the moment I walked onto campus and had my first meeting with Dr. Larry Browning, I knew this was where I was supposed to be and that I was going to grow professionally and have a community that I could connect to.”

Dr. Larry Browning, chair of the Department of Curriculum & Instruction, worked closely with Jackson during her time at Baylor and described her as an exceptional educator who brought more to the program than they could ever give her.

“She was just so exceptionally competent and comfortable doing anything I asked her to do,” Browning said. “We try to have our doctorial students get experience teaching in the undergraduate program and, while most have taught children of public school age, many of them find it difficult to teach other adults how to teach. Dionne was willing to teach anything, whether it was something she had taught before or not, and always did it as well as or better than anyone else.”

While at Baylor, Jackson learned many practices that she took back to Hendrix and incorporated within her own teacher education classes, she said, including service-learning opportunities in the field for all teaching candidates.

“One of my favorite memories is when I was a grad student leading the Introduction to Teaching class,” Jackson said. “It was my first day with my students in the field, and I was watching my students interact with their students and saw how excited the kids were. I remember thinking how awesome it is that a course provides a service-learning experience to our students. This is what it means to develop future educators.”

Jackson said the most exciting part about her role as diversity officer at Hendrix is to fulfill the dreams she had for her alma mater and its students. “As a first-generation, African-American alum of Hendrix and as a faculty member, I’ve been able to enhance programs already in place here, and it’s wonderful.”