Project Promise is a component of the School of Education’s University for Young People, a program for 4th-12th grade students who are identified as gifted and talented. Students choose from dozens of courses, offered on the Baylor campus, taking two classes per day for up to three weeks. Baylor’s UYP program began more than 30 years ago, and the Project Promise element started in 1999.

Tuition for the students is funded through a Baylor University community outreach grant, starting in 2018. Prior to that, funding came from a Community Development Block Grant (CDBG) to the City of Waco from HUD. Project Promise also received a grant in 2016 from the Independent Bank Foundation. 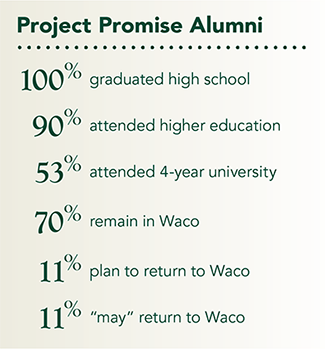 Recent research has shown that the program has significant effects on the students’ likelihood to attend and succeed in post-secondary education. In a 2016 article published in the Journal for the Education of the Gifted, authors from the Baylor School of Education (SOE) reported on a survey of former participants from low-income backgrounds in Baylor’s University for Young People (UYP) enrichment program. Participants’ from low-income backgrounds indicated perceived long-term positive education, career, social, and personal benefits resulting from their participation in UYP.

After reviewing the 89 survey responses, the lead author of the article, Corina Kaul, said that the results were jaw dropping. Not only did 100 percent of the students successfully complete high school, but 90 percent of the Project Promise participants who attended University for Young People for three or more years had subsequently attended postsecondary education.

Former students reported that the Project Promise experience led them to select more rigorous courses in high school, influenced their decision to attend college, and prepared them for college.

Participants also perceived that they made close friends with other Project Promise peers who motivated academic achievement as well as having a positive social, emotional and academic influence. Their participation also fostered confidence in their ability to be successful academically and helped them to better understand their strengths; “UYP definitely surrounds you with other students who are academically heightened which encourages you to work towards being a better student.