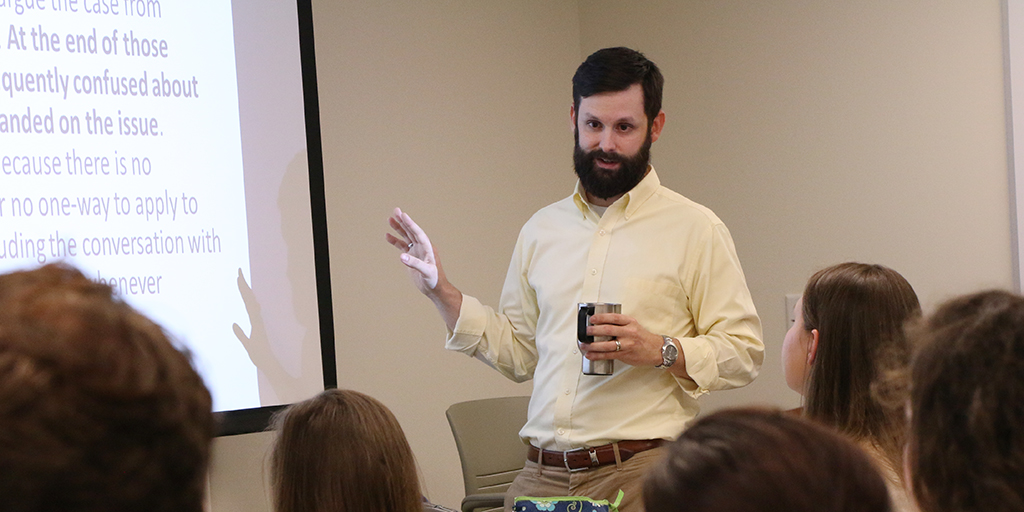 Dr. Grant Morgan is into latent variable modeling, but don't worry — he can explain. A popular classroom teacher, Morgan embodies the ideal of a teacher-researcher.

A computer in Dr. Grant Morgan’s office has been running a program 24/7 for a year. And it’s not even crunching actual data; it’s analyzing “simulated” data that Morgan created.

But why would Morgan spend a year evaluating fake data? Well, it’s complicated.

“It’s not always immediately clear how this relates to education,” Morgan said. “But decisions are made every day about students based on data collected from cognitive or psychological instruments.”

Morgan examines the methods by which educational data are analyzed and whether those methods are providing trustworthy information.

“I play hide and seek with computer programs,” he said. “I see how well the software is able to find the patterns that I hide.”

When researchers collect data from real people, they don’t know if a pattern exists or not. “When I generate the data myself, I know there are patterns,” he explained. “If the computer succeeds in finding my hidden patterns, then I feel confident that I could use that program with a real data set to find real patterns, if they exist.”

This spring, Morgan received the Bruce Thompson Outstanding Paper Award from the Southwest Educational Research Association (SERA), for the second time in three years, for a study analyzing real data on early-childhood violence. He collaborated with Dr. Kara M. Styck of the University of Texas San Antonio.

“We used a nationally representative data set from the federal government and identified preschool children who had been exposed to violence in the home or neighborhood within the last 12 months,” Morgan said. “Then we looked to see if violence exposure predicted membership in one of the behavioral groups that we defined.”

They found that children exposed to violence were significantly more likely to belong to a group defined as “low self-control,” exhibiting behaviors similar to those commonly associated with ADHD. Prior to this study, research had only addressed the effects of violence exposure on older children, not preschoolers.

Despite the complexity of his specialty, Morgan is a popular classroom teacher, attracting graduate students from around the university.

Brita Andercheck, a PhD candidate in sociology, called Morgan an “approachable genius” and said his class in latent variable models was one of the most valuable she has taken at Baylor. “Dr. Morgan has a true gift for distilling complex models and methods into easy-to-understand components,” she said. “As a student, I could really tell how much time and effort he put into crafting in-class examples and assignments for us. Each one built our understanding.”

And that computer that’s been running for a year? It is studying the process of simulation study itself. Morgan explained, “When you simulate data, you have to do it a bunch of different times, but how many? So it’s a simulation study to determine how many times you need to repeat things in a simulation study — it’s just that nerdy.”