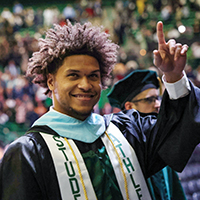 For Baylor football fans, Jalen Pitre is a familiar name. As a safety, Pitre earned many accolades, including first team All-American and Big 12 Defensive Player of the Year, both in the 2021 season. Drafted by the NFL's Houston Texans, Pitre found success beyond the football field — now with two degrees from Baylor, he was dedicated to his education from the very beginning.

Pitre chose Baylor not only because he knew that he would be able to play Big 12 football but also because he believed in the value of a degree from Baylor. Looking back, he sees Baylor as a place where he was able to grow athletically, academically, and spiritually.

He said that even though many athletes may view their education as “Plan B,” he has always seen school and football both as “Plan A.” He completed his BBA in marketing and real estate in August 2020 and his master’s in educational psychology in December 2021.

“I would describe myself as an aggressive learner,” Pitre said. “I’m always looking for new things to learn and always trying to ask questions to teachers.”

After completing his undergraduate degree, Pitre reached out to Dr. Janet Bagby, the Educational Psychology master’s program director, with interest in pursuing his master’s. He still had football eligibility, and he knew that this degree would help him reach his goal of someday being a coach.

“I understand that a lot of head football coaches around the world have graduate degrees, and that they are well educated not only in football but in other things like teaching,” Pitre said. “So, I think educational psychology will definitely help me in my field of work when the time comes.”

From the beginning of his graduate endeavors, Bagby saw Pitre’s dedication to his education. She speaks highly of his work ethic and integrity.

“I’ve been at Baylor for many years, and I would place Jalen in the top ten percent of the students I have taught,” Bagby said. “Jalen is the epitome of the type of student we want at Baylor. He’s not only an outstanding athlete; he is accomplished academically, and Jalen’s character is extremely evident when you spend time with him.”

Bagby — who had Pitre in three classes — says that even during football season, he took a full load of courses and always completed his work on time. Pitre said scheduling and prioritizing school made it possible for him to excel in the classroom.

“In spite of the demands with his football commitments, Jalen always placed a high priority on what he needed to do in the classroom in order to be successful.” Bagby said.

As Pitre launches his career in the NFL, he is also thankful for his education and knows that his degrees will someday help him achieve his other goals.

“Never stop learning,” Pitre said. “You can always learn more.”
Are you looking for more News?
All NewsArchives