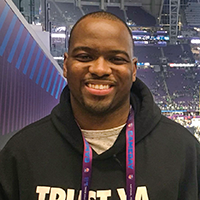 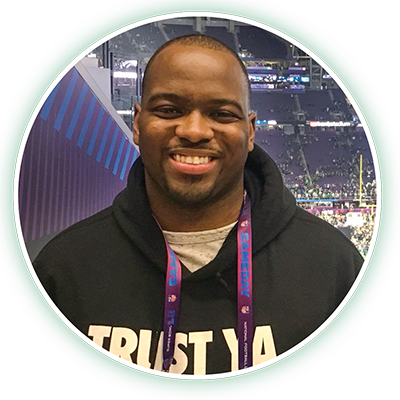 Q: Having grown up in New Jersey and played college football in Pennsylvania, how did you get all the way to Waco for the SOE’s master’s program in Sport Management?

A: I honestly didn’t know what I wanted to do after college, and my athletic director at Allegheny College suggested Baylor. She learned about the program from contacts at the American Football Coaches Association (AFCA), which is headquartered in Waco. I interviewed with Dr. [Jeff] Petersen for the program and was able to do my apprenticeship at the AFCA. When I came to Waco, all I knew was Brittney Griner, because I’m a women’s basketball fan, and RGIII.

Q: How did the apprenticeship go?

A: Great! I especially enjoyed working with youth sports. If it’s done correctly, you can have such a crazy impact and can broaden people’s horizons, and they can have experiences they never would have.

Q: You work with youth sports in the NFL now, so what is the role of the NFL?

A: The NFL has youth programs, such as NFL FLAG Football leagues, and partners with youth organizations and groups like the AFCA and partners like Nike to promote youth athletics. We promote youth sports to inspire values like character, leadership, resilience, teamwork and skills like focus and time-management. The NFL also works with individual teams and their youth programs and presents some awards, such as the Don Shula NFL High School Coach of the Year.

Q: Has this always been your role at the NFL?

A: When I first started, I was in player engagement, working a lot with the website and communication functions. That experience served me well as we’ve had to move so much to virtual venues in the last year.

Q: Do you ever get star struck by NFL players?

A: A few times, when I’ve met players or coaches I’ve looked up to my whole life. It was interesting to meet Odell Beckham, just because of the fanfare that surrounds him and the people always flocking to him. But he needed something from me, and I had a job to do, so you get over it pretty quickly and do the job. I try to treat everyone the same, with respect rather than awe, and to be as normal and regular as possible. And I think they appreciate it.

Q: Are there special perks to working in the NFL?

A: I’ve gotten to go to the Super Bowl several times — but not in 2021. And the best thing about that is that different years I have taken my parents, a cousin, and a friend. Buying a Super Bowl ticket is not something anyone in my family could do. I also enjoy the travel, and I’ve visited places I’d never been like Los Angeles, Miami, London, and Mexico City. For me, the biggest perk is getting to work with a lot of people with different personalities and leadership styles.

WEB EXTRA:
Isaac tells us how he landed a job in the NFL and how others can unlock the secrets to success in a sports career! 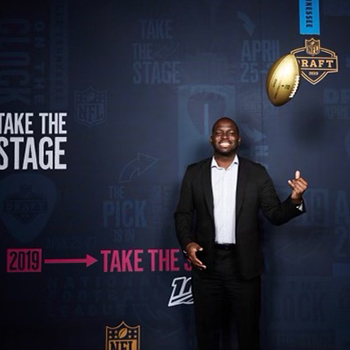 Q: Working for the NFL sounds like a dream job. How did you get hired?

A: While I was at Baylor, I saw on social media that one of my favorite Philadelphia Eagles players, Troy Vincent, was having an event at the University of North Texas and promised to meet with anyone who came. He was — and still is — an executive with the NFL, and I was very interested in one day working there.

So I worked on an elevator pitch for when I met him and headed to Denton. I’d never been to Denton and didn’t know how long it would take, so I left pretty early and arrived about an hour before the event. And the security guard just let me in, probably because Troy had just walked in and she thought I was with their group. I could tell immediately that I was not supposed to be there, and as I was trying to figure out what to do, Troy came up and introduced himself.

We talked for 15 minutes (including my elevator pitch), and he asked me to stay afterward, which I did. We exchanged emails, and he sent me information about different positions and told me to just go through the process. I did that, and one day I got the call from HR that I had a position. So I really got my job by being somewhere I wasn’t supposed to be — and getting lucky.

Q: Do you have advice for others who want to work for the NFL?

A: I would say that for working at the NFL or working in corporate in general, the most important thing you can do is prepare correctly. Work hard in the role you are in, learn as much as you can, and develop great habits. Whether that’s school or another job, the habits you form early will play a big role in your success moving forward.

Q: Football enthusiasts will enjoy this link to the 11-Online project as an example of your work with the NFL. This web resource offers free online skill drills for football. How did something like this develop?
Link: 11onfootball.com

A: I work closely with Nike on all our youth efforts. Regarding the 11-online, it’s a platform that we developed at first to temporarily stand in place of our live activations during COVID. As we continued to work on it, we saw the value of the platform as its reach hits parts of the country where we normally wouldn’t reach.