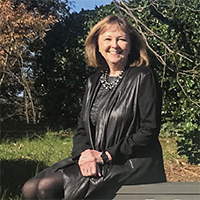 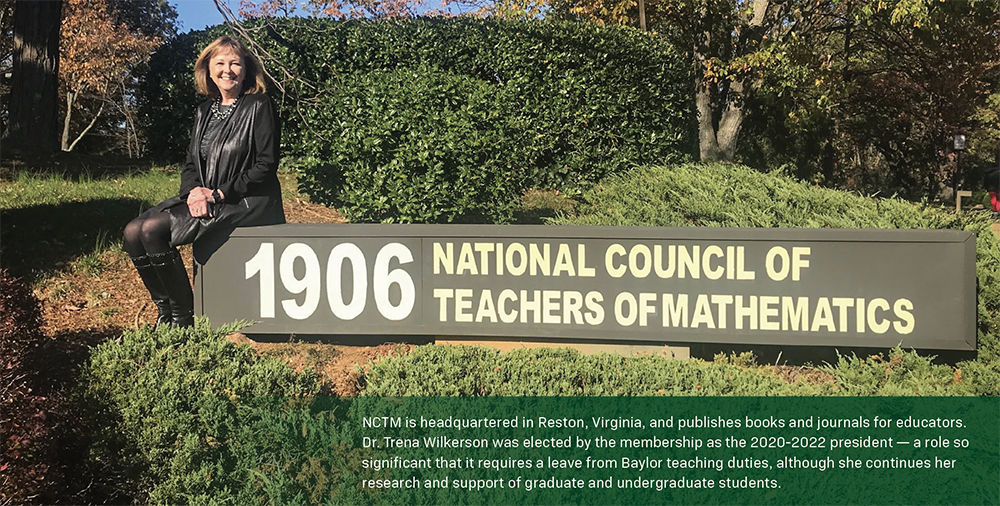 That’s when she took on a major leadership role in the National Council of Teachers of Mathematics (NCTM), an international organization serving more than 30,000 K-12 teachers and teacher educators. Wilkerson became president just as the group was changing the schedule for officer terms, so she will serve a total of two and a half years.

“Access and equity in math education have always been a foundational part of NCTM’s framework,” Wilkerson said. “It is central to our mission.”

The pandemic, she noted, has exacerbated and highlighted these issues. “The pandemic made the public aware of the challenges NCTM has been addressing for years, not the least of which was digital access,” she said.

Receiving the presidential gavel in a virtual ceremony on April 4, 2020, Wilkerson’s first challenge was leading the organization through an anniversary celebration as it marked 100 years in 2020. The planned in-person Centennial conference and celebration was canceled due to COVID, and NCTM shifted the sessions to an online series.

NCTM’s Executive Director Ken Krehbiel said that, although Wilkerson’s first year has been atypical and unprecedented, “She has led NCTM with her unwavering good nature and grace.”
Krehbiel said, “After the sudden cancellation of the 2020 Centennial Annual Meeting, she oversaw the rapid transformation of the content of that conference into 100 Days of Professional Learning, which offered 100 different webinars on weekday evenings from April until October. Trena attended and co-hosted every single session.”

A major ongoing NCTM project that launched in 2018, the “Catalyzing Change” series of publications and webinars, went ahead as scheduled, looking at policies and practices that impact mathematics education at every level in an effort to create positive change.
That series highlights NCTM’s ongoing efforts in equity, social justice, and deep understanding of mathematics, serving as a basis for outreach led by Wilkerson.

One of NCTM’s stances, for example, has been opposition to “tracking” in mathematics education.

“When young students get tracked as ‘low’ or ‘high,’ this actually keeps them from having equitable access to education, so NCTM has challenged that idea,” Wilkerson explained.
Another classroom structure that NCTM has pushed against is “ability grouping” of children. “This can be problematic if students cannot get out of a group, and research shows that all of the groups do not get the same level of rigorous education,” she said.

Another form of undesirable tracking is putting high school students on a specific trajectory that may lead to dead-end pathways. NCTM has advocated for a common mathematics pathway for the first two years of high school, and then allowing students to branch off as they choose.

“Research backs up the concept that it’s high expectations and proper support that enable students to do strong mathematics,” Wilkerson said, and practices like these take support away from large groups of students.

All students have a knowledge base, she noted, and it’s the job of teachers and schools to build on that asset base rather than focusing on deficits.

As NCTM president, Wilkerson has taken her advocacy for these issues to the airwaves in press interviews and around the world addressing educational leaders. She has met with such far-flung groups as the Virginia Board of Education, Oregon’s statewide math education leaders, and two different groups of leaders in Indonesia.

Wilkerson said her role as a media spokesperson for NCTM actually expanded due to the challenges of COVID-19. While she is unable to travel, news outlets are more willing to reach out virtually, and they are also more focused on the issues of equity in education.

Although Wilkerson is an enthusiastic traveler, having led numerous Baylor education groups in study-aboard and mission trips, she is focusing on the positive — the asset base — rather than the deficits caused by the inability to travel. She has approached COVID restrictions with the same approach she expects of math teachers — “Let’s figure out how to move the learning forward and look for opportunities.”

Wilkerson joined NCTM during her first year as a classroom teacher of mathematics at Mandeville High School in Mandeville, Louisiana.

“NCTM was the professional organization that I thought would benefit me most as a teacher,” she said. “Their journals are filled with excellent resources to teach mathematics; that’s why I joined and why I stayed.”

Wilkerson has served on the board of NCTM and in
editorial roles for its journals, as well as authoring numerous articles. She is a co-founder of the affiliate organization

WEB EXTRA: Read one of Dr. Wilkerson's NCTM monthly columns. In this one, she shares a look back at her early career in teaching math, when her principal called her "the greenest thing" he had ever hired.
Are you looking for more News?
All NewsArchives