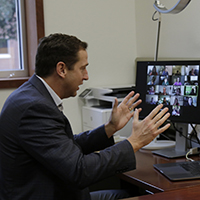 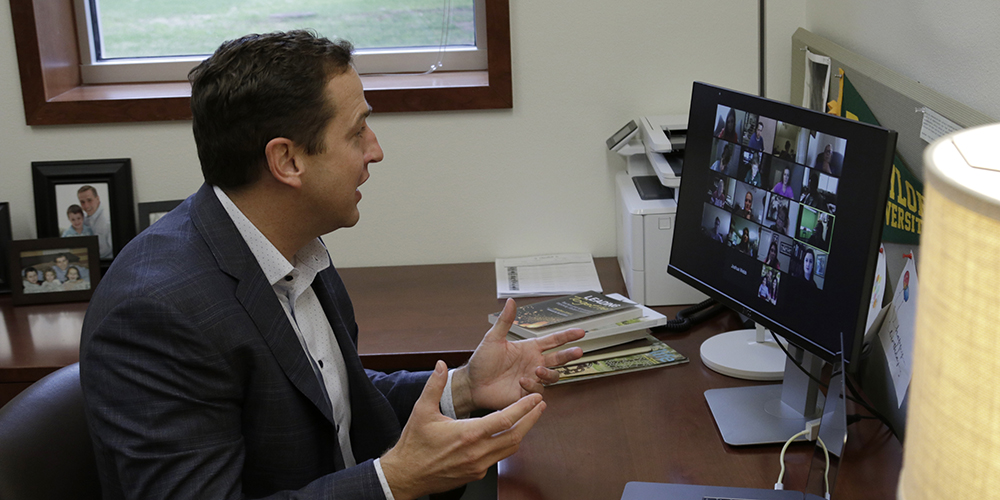 How are you doing? What do you need?

Those two questions don’t sound like a strategic plan, but they form the base of a “pyramid” for K12 school planning in 2020 that Baylor faculty developed in consultation with educators from around the world.

In March, Baylor’s Center for Christian Education (CCE) was well into arrangements for its annual summer learning academy, intending to welcome 250 educators to campus for a conference on collective leadership. Then COVID-19 hit the U.S. Despite the uncertainty around how long it would last and what would come next, the CCE made a quick pivot to help educators — and their students — survive the spring and thrive in the fall.

The CCE engaged immediately with educational leaders who were already part of their learning communities, employing virtual connections and online supports to equip leaders to hold school effectively, regardless of the environment and to monitor the well-being of teachers and students through check-in calls.

“It got started very organically,” said Dr. Matt Thomas, director of the CCE. “We started getting phone calls from friends in education, we started answering questions, and we started asking questions. How might we serve during this time of distress? It began with Zoom conversations and quickly grew into more organized group conversations. By April it was clear there was a greater need.”

School administrators who had been meeting during the spring wanted to bring it down to the classroom level and engage teachers. So the CCE built out a summer program of Virtual Learning Academies for administrators, for teachers categorized by grade level and subject area, and for directors of marketing and enrollment.

The summer academies certainly addressed academics, safety, learning modules, and technology strategies. But the well-being of teachers and students (How are you doing? What do you need?) formed the basis for moving forward and for success, said Dr. Jon Eckert, Baylor Copple Professor in Christian School Leadership (pictured above leading a webinar). The next two levels of the pyramid are engagement and then feedback.

Growing out of the “micro exchanges” in April and May, Eckert said they then collected research and “the best ideas we could find” to plan and launch formal Virtual Learning Academies in June and July. Those encompassed workshops on school and classroom design — instructional delivery options — framed around student well-being, engagement, and feedback. 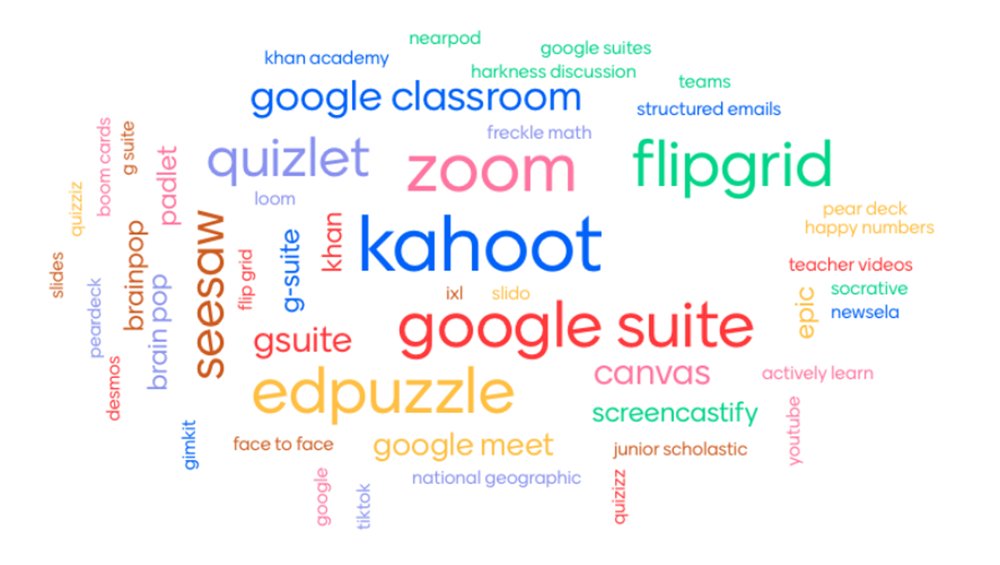 Eckert created a word cloud with the apps that educators recommended most.

While eager to be responsive to school leaders, Eckert and Thomas admit they were skeptical that teachers, receiving no extra pay, would log onto virtual platforms for extensive training in June and July. “They were pretty exhausted by the end of the year, and July is usually a no-fly zone,” Eckert said.

But more than 400 teachers participated, and some paid their own way. Academies for teachers were separated into sessions for elementary, middle and high school. Once they were logged on, they were divided up further into break-out rooms based on interests and needs.

Eckert began the workshops, presenting ideas and sharing expertise and research, before breaking them into groups. “I would need to talk for 20 minutes, because Matt would be madly working in the background on Zoom to organize them into groups based on grade level and discipline,” Eckert said.

Educators attended from more than 20 states and different countries. “We had educators from Montana talking to schools in New York City,” Eckert said. “One of the best ideas came from a teacher in Kenya.”

Eckert and Thomas were also sometimes in different locations. “Matt was in Tennessee part of the time, and one day I did four hours of workshops from a hotel room in Denver with my family,” Eckert said. “They were very quiet, but at one point, half of my son began to emerge through the virtual background!” So basically, it was just like everyone else’s summer, he noted.

Eckert and Thomas worked nearly nonstop on the workshops through June and July, but they emphasize the value that educators found by working with each other. Educators were creating new instructional materials and authentic assessments together, building and improving, and sharing. “The best insights came from people in groups that were sharing ideas,” Eckert said.

“We had Christian educators from all over the country, in both public and independent schools, working on those tools and sharing them,” Eckert said.

The CCE has collected all the tools and information into Google folders and is facilitating continued sharing among educators. “Now they keep going back to those folders, adding and collaborating,” Eckert said. “We wanted to build confidence for what they were heading into this fall and for them to continue this for the school year. By the end of July, they felt more confident about the launch of school in August.”

Thomas said that when the CCE’s planned in-person workshops — like everything else — were cancelled, “We knew we still had work to do.” He added, “We were not going to sit idly by and let schools and teachers struggle. We really just tried to answer the call, and I think that is what the Center is all about.”

Eckert defines collective leadership as working toward shared goals, he said. “That’s all Matt and I were doing this summer — whatever work the Lord put in front of us, based on what teachers and leaders said they needed.” For more information on the Center for Christian Education, visit baylor.edu/CCE. 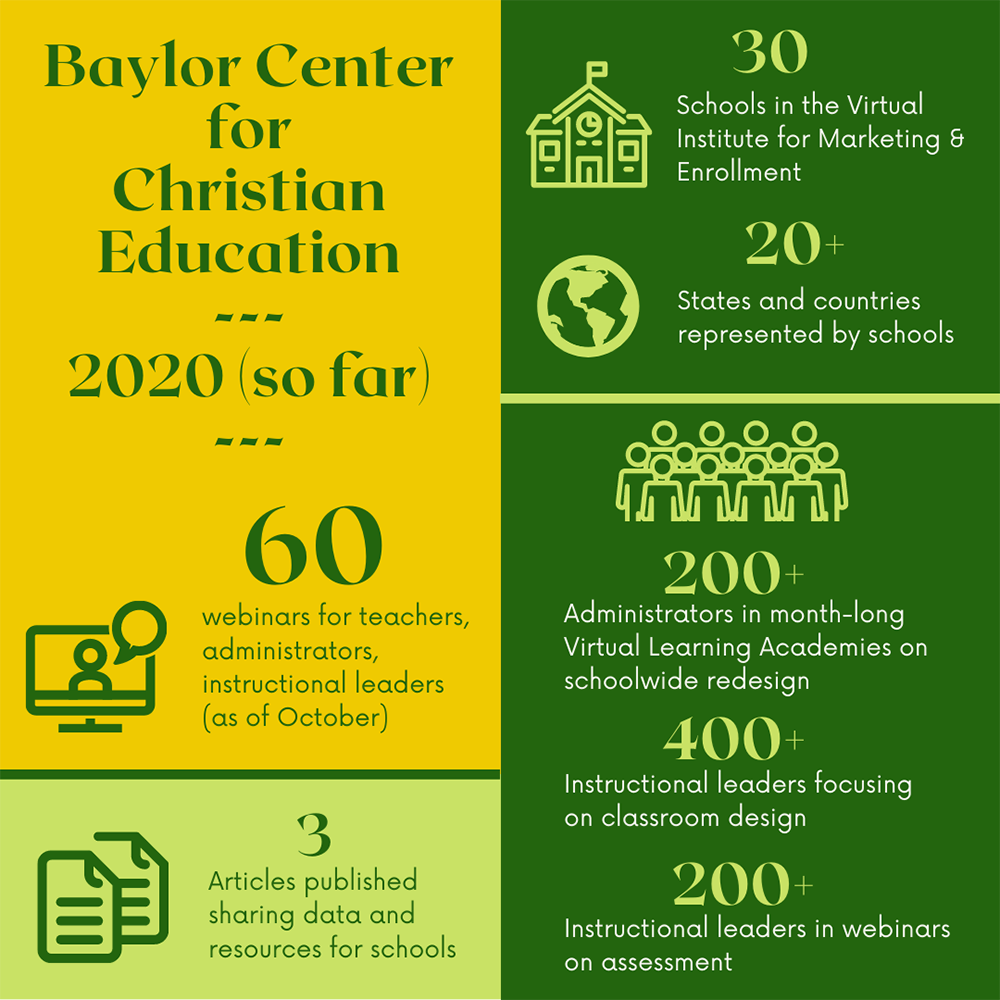