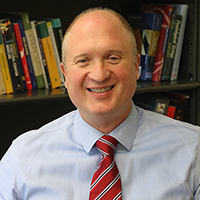 "Testing" can be a dirty word in education, but Dr. Nick Benson, associate professor of educational psychology, says testing is not "bad" by definition. "Testing is often portrayed negatively in the media," he said. "While tests are sometimes misused, there is a large body of research supporting many common uses of test scores."

Benson has committed his academic career and devoted his extensive research to the evaluation of tests and their uses — specifically to the study of the science and practice of psychological and educational testing and assessment.

"I'm for testing; I'm against over-testing," Benson said. "Educators should not collect data that is superfluous, because it's a waste of people's time and money." With an academic background in school psychology that includes degrees at both the Education Specialist and PhD level, Benson spent five years in Florida schools as a school psychologist focusing on individual assessments of students. School psychologists test students individually to determine eligibility for programs such as special-education services, interventions to address learning disabilities, or gifted-and-talented programs. They might look at the results of a student's test from a group setting, like the STAAR, but school psychologists don't typically administer group tests.

According to the National Center for Education Statistics, 14 percent of all public-school students receive special-education services, and the National Center for Learning Disabilities estimates that one in five children has a learning or attention issue. So this kind of assessment affects a significant number of students and can make a big difference to struggling students. "The impact is whether these children receive services and what those services look like," Benson said.

But even individual testing of students by trained professionals is prone to over-use and misuse, Benson said. As a school psychologist on K-12 campuses, he saw all kinds of practices based on "clinical lore," inspiring him to pursue a PhD to focus on change at the core of the profession. "I want to test the assumptions to see if these practices hold up. A lot of decisions were being made without evidence to justify those decisions," he said.

Benson has become a prolific researcher in the field, publishing more than a dozen articles just in 2019 and garnering almost 600 academic citations in the last five years. He has conducted numerous evaluations of various testing instruments, particularly the Weschler Instruments measuring intelligence in both adults and children. Such evaluations have become more challenging, he said, because corporations that produce such tests are more reluctant to share their troves of data.

Benson wants to find out not only whether the tests are well constructed, but also if they are being administered, interpreted, and utilized properly.

Recently, Benson and other researchers published data from a widespread national survey of practicing school psychologists. It had been 20 years since such a survey was conducted, and researchers did find reasons for optimism. Assessment practices by school psychologists had evolved significantly, they found, and practitioners were using more reliable tests and varied frameworks for assessment. But the use of less-reliable instruments and poorly supported practices was still widespread.

Tests should be used only for their intended purposes, Benson said, but educators too often use test results in the wrong ways. "Whenever a test is given, there's a tendency to glean as much information as possible,"; he said. "But more is not better when it comes to being speculative about the results of a test. Someone might give the right test, but not interpret or utilize it in an appropriate way. Our efforts in research are to determine what is fair and effective and to bridge the gap from research to practice."

Benson's teaching duties in Baylor's school psychology program are helping move research into practice in a tangible way. He teaches courses for future school psychologists, plus courses in educational measurement, educational evaluation, and assessment courses for both intellectual evaluations and academic achievement. Baylor SOE's Department of Educational Psychology offers the Educational Specialist degree (EdS) in School Psychology, in Waco and also through a new program in Dallas, launching in August. The EdS is a three-year degree program with a full-year internship and is considered a terminal degree. Educational Psychology also recently added a PhD in School Psychology.

There's much to do in the area of assessing the assessments, Benson said. That's one reason his publishing record is so lengthy.

"Professional standards for testing require that evidence exist to support each unique interpretation and use of test scores," he said. "All too often test users ignore these standards and use scores in ways that have not been studied, or worse, have not stood up to empirical scrutiny. Thus, much research is needed to ensure that evidence exists to guide the practice of testing and assessment."

—By Meg Cullar
Are you looking for more News?
All NewsArchives