A Century of Learning and Light: History Introduction 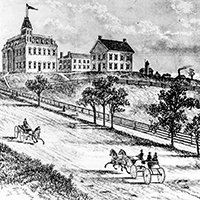 Even before Texas was a state, the leaders who became Baylor University’s founders were among a group of citizen scholars concerned with how the growing Republic should educate its children. With their early pioneering days now a memory, Texans were seeking a better quality of life, and establishing schools became a priority.

Many of Baylor’s early leaders — including Rufus Burleson, William Carey Crane, Oscar Henry Cooper and Samuel Palmer Brooks — played a huge role in establishing what became the public school system of Texas. Together, they led professional agencies and worked to establish minimum standards, all while promoting the cause of teacher training in an environment of Christian faith.

In its infancy, Baylor was located in Independence, Texas, a Baptist hub and educational center in central Texas. By the time it arrived in Waco in 1886, courses in pedagogy — the art of teaching — were well established and increasingly in high demand. A model school was even built on campus in 1912 so teacher candidates could observe the methods of more seasoned educators.

In a 1919 letter to the Board of Regents, President Samuel Palmer Brooks stated his desire to grow the Department of Education within the larger university structure, thus giving life to the School of Education. That was 100 years ago, and we’ve never looked back.

As we enter our second century, Baylor School of Education graduates continue to carry those early missions and practices established by the University’s first leaders to Texas classrooms and beyond, from preschools to the highest levels of academia. Our alumni improve lives and communities across the nation and the world as respected and accomplished teachers, counselors, administrators, sport management professionals, scholars and more.

We are at the forefront of creating new knowledge, policies and practices in teacher preparation, educational psychology and educational leadership. Yet, as any Baylor graduate can tell you, the true value of a degree from this university is a Christian commitment to character education and lifelong learning — things you cannot put a price on.

We are a diverse group of learners and leaders, ready for the challenges a second century presents. It feels good to change the world for the better. We think you’ll agree. “The public school is one of the most important bulwarks of American civilization. Monarchies and despotisms may flourish on the ignorance of their subjects, but a free government and an independent people can enjoy the blessings of liberty only on condition of the general diffusion of knowledge. The public school is thus our greatest and most important educational agency. It is the people’s school. It provides the great majority of our citizens with all the education they have. Whatever, therefore, strengthens the common school is in the nature of a public benefaction.” —1919 Baylor Bulletin
Are you looking for more News?
All NewsArchives