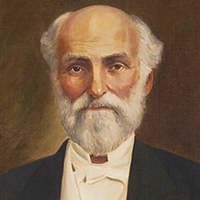 Before Baylor had a School of Education — even before Texas was a state — the University’s early leaders were busy laying the groundwork for public education in Texas, shaping the state’s academic future along with the Baylor professionals who would set early standards for educator training.

Texas became a state in 1845, but early influencers had already taken the lead in discussing how to approach teaching its children. Baylor co-founders Rev. William Tryon and Robert Emmett Bledsoe Baylor were among that group of early influencers, and in 1846 they joined “The Group of Friends for Education in Texas,” the goal of which was to decide a systematic method for teaching in the state. Early Texas schools were mostly private and denominational, and they emphasized morals and decorum over academics. These private schools all but vanished during the Civil War, so when a new push emerged in the mid-1860s to make public education the norm everywhere, resentful Texans resisted.

Enter Rufus C. Burleson and William Carey Crane, both of whom would serve terms as Baylor president. Both men believed in free schools for all Texas children, with Crane also favoring educating black children and freed men and women. Scholarly and polished, Crane was often asked to speak and lead educational discussions in the state. By 1867 Burleson was working with New England native George Peabody — and a generous $2 million fund — to help former Confederate states set up free public schools. The people of Texas were eventually swayed by the views of the Peabody board, though board members did not advocate for racially integrated education.

In 1871 Burleson and Crane co-founded the Texas State Teacher’s Association, and Crane was elected its first president. During Burleson’s second term as president of Baylor, from 1886-1897, he began teaching pedagogical courses. These early pedagogy courses would evolve into Baylor’s Normal Institute, a summer program to train students and professionals who wanted a teaching certificate.

As interest in public education grew, so too did Baylor’s commitment to training teachers. Oscar Henry Cooper, who served as Baylor president from 1899-1902, came to the office after having served as state superintendent of public instruction of Texas. He helped lay the groundwork for county supervision of schools, uniform textbooks, and standards for high schools. It was during his term as Baylor’s president that the Department of Pedagogy was established. For nearly a decade, from 1900 to 1909, Professor Frederick Eby, a Canadian who studied under educational philosopher John Dewey, was the lone professor in the new Baylor Department of Pedagogy. Eby helped form the junior college system of Texas but split with Dewey regarding Eby’s belief that education should have a spiritual emphasis.

By 1909, the leadership in the Department of Pedagogy (now called the Department of Philosophy and Education), changed. Professor Warren Waverly Phelan replaced Frederick Eby, and Miss Lillie Martin, instructor in primary methods, joined the department and became a long-lasting presence at Baylor. From 1912-1919 Martin taught hands-on education courses from a model school on the Baylor campus, open to children from the Waco community.

In 1915, Texas passed a compulsory attendance law stipulating that, by 1919, all Texas children ages eight to 14 would attend 100 days of school annually. There was little resistance to the new law, which signified a change in the mindset of Texans regarding public education. This, along with increasing enrollment in the Department of Pedagogy, indicated the establishment of Baylor’s School of Education was right for the times.