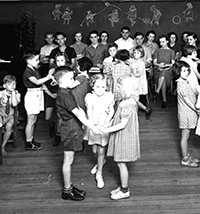 The establishment in 1919 of the Baylor School of Education was fueled significantly by Baylor’s growth and one man’s desire to find a place for pedagogy courses within the quickly expanding university. President Samuel Palmer Brooks, popular and active in educational circles, led a push that radically changed not only the University’s academic offerings but also how Baylor would approach teaching future educators. “Dear Sirs, it is my desire to enlarge the Department of Education for the coming year,” Brooks wrote the Board of Regents in 1918. “To do this requires more teachers and better ones.”

Brooks recommended departments of Secondary, Elementary and Primary education along with Administrative Education and Educational Psychology and Philosophy, although separate departments were not designated until later.

The inaugural courses were taught by a faculty of three, along with other courses offered for teachers from within the College of Arts and Sciences. The summer Normal Institute continued, but Lillie Martin’s Model School on campus closed, and Baylor education students began observing classes in Waco schools. The first dean of the School of Education was Dr. T.D. Brooks, under whose leadership the school grew quickly. By the 1923-1924 school year, there were 854 people taking one or more courses in the new SOE. T.D. Brooks was among several new hires that would enhance the SOE’s academic standing. By 1925, the SOE tied with the Department of English for having the most PhDs on staff, at three each. They were T.D. Brooks, the dean, who studied at the University of Chicago; Dr. W.S. Allen, who studied at Columbia and would become the SOE’s second dean in 1931; and Dr. Robert A. Davis, who studied at Harvard University.

In an effort not to turn anyone away and to increase the number of female students, President Samuel Palmer Brooks in 1924 approached the Baptist General Convention of Texas and asked for help in gaining living arrangements for women. The Woman’s Missionary Union gave money to help fund Memorial Hall, a women’s residence hall which would come to house many SOE students. On a national scale, the profession of teaching at the dawn of the 20th Century was a mostly feminine pursuit, with women filling two-thirds of classrooms nationwide while men were supervisors and principals. Salaries were low, and when teachers missed work, their pay was given to their substitute. At a 1925 vocational conference organized by Edna McDaniel, Baylor’s dean of women, she told a reporter for The Lariat, “It is a pity that there are so many women with various talents who are all trying to be school teachers when they finish their college career. School teaching is a noble work, but there are a large number of other fields in which some women would be far more successful than they would be in teaching.” However, the SOE’s stated intentions to train “teachers, supervisors and school administrators” indicated its intention to teach both men and women for classroom teaching and administrating.

After T.D. Brooks’ departure in 1931, Dr. W.S. Allen took the helm. Then, in 1935, Dr. Lorena Stretch became the third dean, proving herself a long-lasting presence at the University to which she would dedicate her life, and the SOE’s longest serving dean. For 22 years, she had an almost all male faculty working under her. Stretch received her bachelor’s and master’s degrees at Baylor, followed by a PhD at George Peabody College for Teachers in Tennessee. As early as 1918 she was listed as a professor in the Baylor Summer Normal Institute. She was active in local and national educational associations, and she wrote frequently about educational matters, including theory. In one of her books, The Curriculum and the Child, she shared her thoughts on how to educate children in the classroom. Stretch made it her mission to have the profession of education treated as just that — a profession.

Between 1938 and 1940, Baylor constructed and dedicated Pat Neff Hall, and the SOE moved in. In 1940, the School advertised an audiovisual class taught during the summer session from within the new, significant building, and SOE professor Dr. M.L. Goetting taught a course to help public school officials supervise audiovisual education, a new trend.

During the same summer session, Stretch taught teachers how to develop students’ character and how to become high school administrators. Calls to the SOE’s Teacher Placement Committee came from all across the nation.