Deans of the SOE 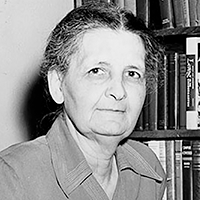 Fourteen men and women have served the School of Education as dean or interim dean since 1919. Biographies of all SOE deans can be found on the Centennial website at "Deans of the SOE"

Dr. Lorena Stretch, who served from 1935-1957, was the longest serving dean and the only woman to hold the position not as an interim.

Few people shaped the School of Education as did Dr. Lorena Stretch, first as a Baylor student, later as a professor, and eventually as “Chairman.” The first woman to serve in this capacity and the School’s longest serving dean, she is credited with helping grow the SOE into one of the University’s largest schools and served as dean from 1935 until 1957, leading a male faculty during most of her tenure. Stretch came to Baylor in 1918 from Meridian, Texas, and is listed as teaching literature courses during the Summer Normal Institute that same year. She earned her bachelor’s and master’s degrees with high honors from Baylor, and then earned her PhD from George Peabody College in Nashville. She returned to Baylor in 1926 and joined the SOE faculty.

Easily recognized on campus, she wore large cartwheel hats in all seasons and almost always donned black, flowing clothes. “She would walk in with her big crimson-color hat, and I was scared to death of her,” remembered Darlene Kyser, who served as assistant to six deans and four interim deans while Stretch remained on the faculty. “She was a very commanding person — a very take-charge person.” Serious and sometimes stern, Stretch expected a lot from her students, according to an interview with former student and Professor Emeritus Susan K. Johnsen. Stretch spoke often of the significance and prestige of teacher education and often said effective teachers must have college degrees.

“I think she was a very serious educator,” recalled Johnsen.

“One of the things I remember her talking about in her classes was that teaching was a profession just like every other profession.”

Stretch also advocated for character education and said the role of the teacher was, along with book learning, to develop students as whole people and further their social and cultural development.

Ginger Terrell, a 1951 graduate of the SOE who for years oversaw SOE interns and still teaches at Bells Hill Elementary in Waco ISD, said Stretch is the reason why Baylor teacher graduates are successful, then as now.

Stretch was all business, Terrell said, and if you memorized her lecture notes you could make an “A.” But occasionally she’d misplace those notes, and that’s “when the magic happened,” Terrell said. “That’s when you learned how to be a teacher.” Stretch also was known on campus as the perennial winner of the donkey races on All-University Day, now Diadeloso. Every year she showed up for the race wearing her finest equestrian attire, and she defended her title vigorously for many years.