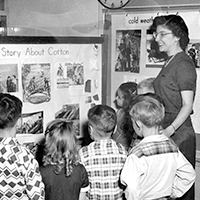 After World War II, education became a patriotic ideal for Americans, and they sought to reform many of its inadequacies. As people moved from towns to cities, a chasm grew between urban and rural schools. In an effort to reform the quality of its schools, the Texas Legislature passed the Gilmer-Aiken laws in 1949. Among other things, the new laws consolidated school districts and provided funding for equalization. Teachers received pay increases, and their level of education now dictated their salaries. Funding for campuses was determined by school attendance.

The new law also established what would become the Texas Education Agency and formalized requirements for teacher certification, which in turn affected the courses college students had to take. At the same time, Texas was experiencing a significant teacher shortage because of low teacher salaries and an influx of war babies entering school. Determined to recruit more teacher candidates to her School, SOE Dean Lorena Stretch addressed students one morning during Baylor chapel, announcing an unprecedented demand for elementary teachers in Texas. At the time, there were twice as many women than men enrolled in the SOE. Stretch predicted the demand — and pay — for teachers would only increase. It was 1950, and the starting annual salary for a college graduate with no previous teaching experience was $2,403.

In 1951, the SOE began offering a short-lived PhD program, along with the Doctor of Education (EdD), joining the School of English as the only two schools to offer PhDs. The first three graduates were Bill Holt, W.F. Hill and Joe Philbrick.

Other higher education courses followed, and in 1953, 24 teachers graduated from the School with a master’s degree. By 1956, the PhD would disappear from the SOE’s offerings, not to return until 1996 within the Department of Educational Psychology. Also during the 1950s, and with his own resources, Dr. M.L. Goetting — who would become dean in 1957 after Stretch’s retirement — established a film lending library for rural schools in McLennan County. Goetting also provided religious films for local churches from the library. When the Region 12 Education Service Center was established in 1968, Goetting’s film collection served as the basis of its film library.

In 1955, SOE Alumna Waurine Walker spoke to the Baylor graduating class on the occasion of the 100th anniversary of the first female to graduate from Baylor — Mary Gentry Kavanaugh. Walker was president of the National Education Association, and a pictorial in Life Magazine chronicled her installation as president. Her speech to the graduates reflected her optimism in the power of teaching.

“Neither free speech, nor a free press, nor popular government nor universal education can long endure without a constantly renewed supply of teachers. Upon the character and quality of teachers the effectiveness of all education depends,” she told graduates.

Goetting became dean in 1957 and was an expert in education certificate laws that evolved under the Gilmer-Aiken act. These also were turbulent times for the nation, and during much of Goetting’s tenure, which lasted 14 years. In 1954, Brown v. the Board of Education was enacted into law, and Waco schools began the integration process slowly, and with difficulty.

In 1962, in an effort to raise awareness of integration, 12 SOE student teachers were assigned to study under elementary teachers who had graduated from Paul Quinn College, a historically black college located in Waco. Baylor also would serve as the site of a Region 12 sponsored program to help teachers develop an awareness of integration. A course in special topics recurred throughout the decade, along with courses in urban, bilingual and gifted education. A focus on gifted education was a direct response to the embarrassment felt by the U.S. after the Russians launched Sputnik into space in 1957.

During Goetting’s tenure, the SOE grew to include 11 full-time faculty members with doctoral degrees. Along with increased enrollment came a need for more space, more scholarships and improvement in the library. The SOE was coordinating the certification of about 400 teachers a year. The graduate program included the Doctor of Education degree, and there also were programs in special, elementary, and secondary education. A program leading to professional certificates for counselors, supervisors and superintendents also was offered.

By 1972, Baylor was educating more teachers than any other private school in Texas, and it was during this boom that it began offering its own bachelor of science in education (BSEd) instead of issuing the degree from within the College of Arts and Sciences. In announcements about the change, Dr. L.V. McNamee, now dean, reported that traditional teacher education programs were going through a period of transition and that the SOE needed flexibility. He predicted that there would be a period of radical educational change that would occur for the next few years.

McNamee conducted extensive research into the needs of gifted students, and he expanded the curriculum to better prepare educators to teach reading. Under his leadership the SOE began to departmentalize, and certificates were granted to kindergarten teachers for the first time.