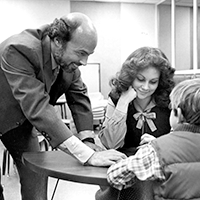 While the 1960s saw efforts to make education equal for all, the 1970s continued that movement along with a national push for accountability for both students and teachers. By the mid-1970s, 33 states had programs in place to test student progress and achievement. Texas, California and New York passed laws linking teacher education programs to teacher competencies and classroom abilities.

As Texas pushed for competency-based education, or CBE, Baylor SOE leaders resisted, fearing it would dampen academic freedom. However, Dr. Bill D. Lamkin, a professor in the department who in 1981 would become dean, said CBE ultimately resulted in a more hands-on approach to learning as education students were pushed off campus and into schools. During the 1970s, the SOE became one of the first academic units at Baylor to begin using computers. With the support of Dean M.L. Goetting, Lamkin began using this new technology and teaching graduate coursework about computers in the classroom. This was also a time for staff growth, and under Dr. L.V. McNamee, dean from 1971-1981, the SOE began to solidify its graduate offerings.

The year 1972 was significant for a number of reasons, in addition to the launch of the BSEd. Title IX became law, prohibiting discrimination on the basis of gender in any federally funded education program or activity, and the Department of Health, Human Performance and Recreation moved to the SOE from the College of Arts and Sciences. Betty Ruth Baker, an assistant SOE professor, became the first woman to be appointed to the Baylor University Athletic Council. As the theme of educational reform continued, a 1980 Texas Monthly article entitled “Why Teachers Can’t Teach” blamed an overemphasis on John Dewey’s ideas of student-centered learning above subject-matter learning. Secretary of Education Terrell Bell expanded on this theme and wrote the highly influential report, A Nation at Risk, in 1983, beginning a decade characterized by educational reform and teacher accountability, which continues today.

As a result of the climate created by A Nation at Risk, many larger universities closed their schools of education. In response, Lamkin emphasized the need for prepared, knowledgeable teachers. In 1986, the SOE joined the Holmes Partnership, a consortium of 96 universities with schools of education dedicated to strengthening relationships between the SOEs and their larger universities and communities. Thus was born the idea of the professional development school — public schools in which college students would practice teach. Dr. Robert J. Yinger, dean from 1998-2005, would eventually serve as the president of the Holmes Partnership, bringing its headquarters to Baylor and ensuring the SOE a continued voice in national education discussions. During the 1980s, the number of hours an education student spent in fieldwork increased dramatically. In Holmes Partnership discussions, the idea for a collaborative school took shape. In 1993, Hillcrest Professional Development School opened its doors, a program where pupils, master teachers, new teachers and student teachers were brought together under one roof. Many undergraduate courses were taught at Hillcrest in the dedicated PDS room.

In 1991, a new MSEd program was introduced to prepare students to become principals. Two years later, the SOE introduced a master’s program in sport management to prepare students interested in sport-related careers and develop marketable skills managing professional, collegiate or K-12 sports programs. By 1998, the SOE boasted 1,600 students, most of whom were elementary education majors, and the most popular graduate field of study was educational administration. Opened in 2013 in collaboration with Baylor Scott & White McLane Children’s, the Baylor University Center for Developmental Disabilities (BCDD) provides assessment and therapy services for children with developmental disabilities, such as autism spectrum disorders, and opportunities for interdisciplinary research by Baylor faculty and students. Within the Center for Christian Education (CCE), the Copple Endowed Chair in Christian School Leadership was established, reflecting Baylor’s mission to educate men and women for worldwide leadership and service. The CCE is dedicated to advancing evidence-based approaches to educational improvement and values-driven leadership.

As the SOE enters its second century, a connection to the community and a desire for lifelong learning continues to drive its degree offerings. Baylor SOE has weathered trends while creating a multifaceted program for preparing tomorrow’s teachers and leaders. It has grown in research and continues its long tradition of preparing students on multiple levels. It has continued to build on a solid foundation while progressing to create a dynamic, nationally and globally focused program. The future is bright.