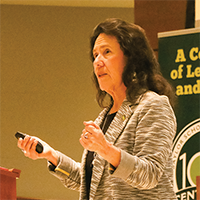 A professor at the University of Utah College of Education, Franquiz said her personal journey to bilingualism and multiculturalism influenced her academic approach. A native of Puerto Rico, she grew up in a military family, moving many times. She said Spanish became “something that I was ashamed of, for a while, because teachers told my parents that I needed English.” By the time she finished high school, she had lost her heritage language and had to re-acquire Spanish in college.

Because of her experiences, Franquiz advocates for a more flexible approach to bilingual education that treasures and builds literacy using two or more languages and cultures.

Franquiz said most American schools approach bilingual education by teaching English as a remedy for non-English speakers, without retaining the student’s native language. This approach, she said, is not universal.

New generations of American youth — with ties to trans-national families — are more flexible and less ethnically and linguistically polarized than their parents and grandparents, she said. Teaching them effectively will involve dismantling current ideas and walls.

In addition to her role as professor, she is the lead editor of the Bilingual Research Journal, the field’s premier research journal. She also has published two books on migrant education and Latino Studies as well as numerous scholarly articles in prestigious journals.

During her time in Waco, Franquiz also gave presentations at Education Service Center Region 12, met with Baylor education students and toured local school campuses. Her lecture was co-sponsored by the Baylor Office of the Vice Provost for Research.

You can find a link to Franquiz’s lecture at baylor.edu/SOE/100/Franquiz.