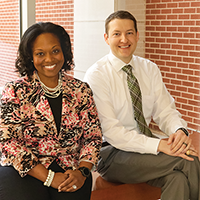 The Holdsworth Center, founded in 2017 by H-E-B executive Charles Butt and funded with an influx of $250 million from the grocery store CEO and philanthropist, helps its partner districts build systems and structures to improve student performance by training district leaders, principals, and teachers. Each selected district engages in a five-year partnership, with progressively more personnel involved each year.

The center chose only seven districts in its first year and adds a new cohort each year. The inaugural group included both Lamar Consolidated and Arlington Independent School Districts.

Mike Rockwood, chief of staff of Lamar CISD and a second-year student in Baylor's EdD in K-12 Educational Leadership, helped write Lamar CISD's application and is one of six Lamar leaders in Holdsworth's District Leadership Program -- the focus during the first year.

Rockwood said that Lamar CISD, like each district, began with a leadership definition. "Our focus is really on grounding district leaders in good research and theory and then building personal leadership skills, effective teaming, and aligned systems and structures," he said.

Rockwood attends training sessions at the Holdsworth Center and has traveled to observe and learn from school systems in Canada and Atlanta. In addition, Holdsworth employees are embedded in the district office as consultants.

During a district's second year of partnership, the program brings in teams from selected schools for the Campus Leadership Program. That phase in Arlington ISD brought Natasha Epps Harris onto the Holdsworth team. Also a student in Baylor's EdD in K-12 Educational Leadership program, Harris is a first-year principal of Lynn Hale Elementary School, after two years as assistant principal. Hale's Holdsworth team comprises Harris, another administrator and three teachers. They attend leadership sessions and travel to other districts and companies for learning opportunities.

"Each principal is assigned an executive coach," Harris said. "We communicate twice a month. We work through issues and problems on campus, focus on the content of the Holdsworth training sessions, or maybe address a special project or planning."

Both Rockwood and Harris said the Holdsworth training sessions are top notch, with speakers and leaders who are Ivy League professors and bestselling authors. "When we read a well-known book in preparation for the seminar, the author of that book will be our trainer for two days when we attend the session," Harris said.

Harris and Rockwood said that everyone in the districts benefits. "Over the five-year partnership, more than half of the campuses will be a part of the process," Rockwood said. "And district leaders and principals go back and work with others. It really cascades through the entire organization."

Harris said she already sees improvement at her campus, which chose writing skills as its "problem of practice." She said district testing of students shows a significant increase in student writing scores.

Rockwood noted that school districts pay nothing for the program. "We are getting world-class training, leadership development and time to plan as a leadership team, and this is free of cost to taxpayers," he said. "The ultimate goal is to improve the lives of our students."