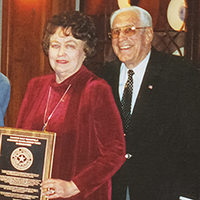 Sharon Daly Mansfield, BA '53, was a legendary teacher, described by former students as both the "hardest" and "best" teacher they ever had. Appropriately, the largest undergraduate student scholarship fund at the Baylor School of Education is named in her honor.

A teacher of high school English and Latin, Mansfield passed away on Jan. 22, and the outpouring from her former students provided ample evidence of her impact:

"Mrs. Mansfield's passion for education, her students and her subject made her the reason I am a teacher today."

"Mrs. Mansfield was the best teacher I ever had. She made us love what we were studying, and it became part of us."

"Hands down the best English teacher I had."

Mansfield spent most of her teaching career at Waco's Richfield High School (later Waco High School), starting in 1962 and retiring in 2001. Students feared her sophomore English class but also knew that, if they succeeded there, they would be able to place out of university English courses with ease. During the last 10 years of her career, she also taught Latin and World History. Her full career in the classroom lasted 48 years.

While at Richfield, Mansfield taught the children of Baylor supporters Ted Getterman, BBA '49, JD '51 -- who passed away in 2014 -- and Sue Getterman, BA '50. Sue Getterman is a graduate of the School of Education, and when the family decided in 2002 to establish a scholarship for future educators, they wanted to name it in honor of the most outstanding teacher they knew: Sharon Mansfield.

"She was just such an excellent teacher that she inspired her students to do things that they wouldn't have done," Getterman said.

Mansfield's dedication to education extended to her family life. Of course, she spent many evenings grading papers at home. And of course, she corrected the grammar of her children and grandchildren, who all know the difference between "lie" and "lay." When her children wrote letters home from summer camp, they would return to find the letters on their beds, with grammatical errors corrected. And when a treasured watch was stolen, Mansfield used the insurance money to purchase encyclopedias, rather than replacing the jewelry.

She was described as a "Renaissance woman . . . who believed in public education and in the importance of knowing how to write a proper five-paragraph theme."

Through the years, the Getterman family, the Mansfield family, and many others -- including grateful former students -- have continued to build the endowment dedicated to the legendary teacher.

"There are more great teachers out there,&rdquo; Getterman said. "And they mean something."

You can support future teachers by donating to the Sharon Daly Mansfield Endowed Fund in Education, which was designated for memorial gifts by the family, or other funds.

To find out how you can support the School of Education, contact Michele Tigelaar at (254) 227-7373 or 800-BAYLOR-U, option 4; Michele_Tigelaar@baylor.edu; or visit baylor.edu/give.