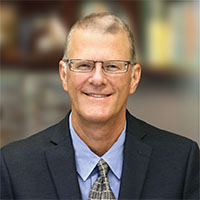 Last fall I became aware of a documentary film entitled Backpack Full of Cash. This film, narrated by Matt Damon, addresses the highly controversial and politicized issue of the privatization of schooling (e.g., for-profit charter schools) in the U.S. It raises hotly debated issues of school vouchers, high-stakes accountability testing, and church-state separation.

At the time, the Waco ISD board and their new superintendent, Dr. Marcus Nelson, were planning how they would address the potential closure of five schools that the state had threatened due to multiple consecutive years of "Improvement Required" status on accountability tests. The idea that eventually came to fruition was the creation of an "in-district charter school" &mdash; Transformation Waco. Given the level of visibility of these issues, I wanted to bring the film to campus and follow it with a discussion panel of local superintendents from public and charter school institutions. You will read more about this successful event in this volume of Impact.

This film helped me better understand how public schools provide a mechanism whereby all children &mdash; regardless of socio-economic status, ethnicity, or ability &mdash; are given an equal opportunity to be educated. Public schools are portrayed as the engine of our democracy in a compelling way. We have a long way to go in addressing the disparity among public schools, but after viewing this film, I believe even more strongly in the foundational role public schools play in our democracy.

The 1918-19 Baylor Bulletin includes an introduction to the School of Education that states: ". . . . a free government and an independent people can enjoy the blessings of liberty only on condition of the general diffusion of knowledge. The public school is thus our greatest and most important agency. It is the people's school. . . . Whatever, therefore, strengthens the common school is in the nature of a public benefaction.&rdquo; In training educators, it said, the University was holding forth &ldquo;the torch of truth so high that its benignant light might shine into every community.";

If there is a showing of Backpack Full of Cash near your community, I highly recommend it. More specifically, I applaud and thank our graduates who are shining &ldquo;the torch of truth&rdquo; in public schools in our city, state, and across our nation.