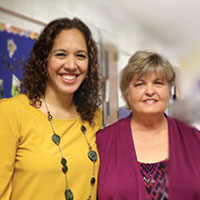 Kindergarten students walk quietly down the school hallway in single file, hands crossed over their chests in “proud pose.” This is one teacher’s way of helping students move through the halls in a manner that is safe, responsible and respectful.

In fact, that is the new mantra at Waco’s Provident Heights Elementary School — “Be safe, be responsible, be respectful.” And when school began this fall, the environment was completely different from a year earlier — the result of long hours of collaboration between the school’s teachers and behavioral experts in the Department of Educational Psychology at Baylor’s School of Education.

Baylor professors and graduate students have helped build a system and trained the staff in “Positive Behavioral Intervention and Supports” (PBIS), a school-wide behavior management framework to assure that students know the expected behavior in every venue — from the classroom to the bathroom. As the name indicates, the process also emphasizes the affirmation of students when they are doing the right thing, not just the consequences when they are not. “I think a typical school has a lot of these practices on paper,” said Kristen Padilla-Mainor, clinical assistant professor and co-principal investigator for the project. “But development of a school-wide approach for systematic practices and lesson plans — and then the subsequent training of the entire school staff — takes time and resources that many schools don’t have. Most schools tend to be reactive rather than proactive. A large, systematic overhaul requires expertise in training, research and behavior analysis and management.”

Padilla-Mainor said the approach at Provident Heights began with buy-in and enthusiasm from the staff. When the Waco ISD school board awarded the two-year, $348,000 contract for the project known as Campus-Based Family Services, the Baylor team met with staff from several different schools in the district before selecting Provident Heights based on the commitment of the principal and staff. Principal Debbie Sims said the entire staff was “gung ho” from the moment they heard about the opportunity. “We had new students coming in from a rezoning process, so we knew we were up against even more challenges,” she said. “Last year we laid the groundwork, with everyone having input in choosing the theme of ‘be safe, be responsible, be respectful,’ and determining the procedures for community spaces like the hallways, the cafeteria, the dismissal area. We expect to see a huge difference as we implement the plan.”

Sims said that teachers sometimes had widely varying strategies and thresholds. “They all had procedures, but were they all the same? Only the cafeteria was relatively systematic,” Sims said. School-wide expectations will also help children as they move from one grade to the next — behavior expectations will be the same — resulting in long-term improvements.

Different expectations in different settings can lead to “a lot of opportunities for trouble,” Padilla-Mainor said. “When a student thinks, ‘I can do this’ with a certain teacher, they naturally try to push the envelope elsewhere.” Baylor personnel also helped the school streamline and refine its reporting system, so that teachers would be creating data that told an accurate story. Graduate students in the School of Education’s Applied Behavior Analysis and School Psychology programs played a key role in that.

“We went to classes and took notes on what the behavioral problems were,” said Brent Deeb, a Baylor master’s student working at Provident Heights for the second year. “The school’s referral forms allowed for general behavioral comments, so it was difficult to quantify what the problems were. Now they have a hierarchy of behaviors based on severity.”

The graduate students also quantified the praise-to-correction ratio in individual classrooms. “One of the biggest things I’ve learned is that a lot of teachers are not aware of their praise-to-correction ratio,” Deeb said. “Some might be 80-1 in correcting behavior, because it’s easy to forget the positive reinforcement. That simple adjustment can help a lot of classrooms — just trying to encourage students and having the positive outweigh the negative.”

Padilla-Mainor said, “A lot of times we mainly give attention to behaviors that distract, disrupt or disturb, and changing that can make a big difference.”

Baylor officials are also on hand for students who need more intensive help.

“The universal strategies will work for the majority of the students,” Padilla-Mainor said. “About 15 percent will need a more intensive approach, probably in a group. And maybe five percent will display severe behavioral problems that require more individualized intervention. That is when our faculty would come in and do functional assessments to figure out why this behavior is happening, how to address it and prevent it.”

As they implement plans this year, Baylor faculty and students will also conduct academic research, collecting data that measures the project’s success, so that it can be refined and replicated.
Padilla-Mainor said the Baylor team, working on site at the school, is bridging the research-to-practice gap. “We have faculty who do research in these areas and have the expertise in behavioral management,” she said. “This is a way to bring those research-based interventions to the campus; we want to do what works.”
Are you looking for more News?
All NewsArchives