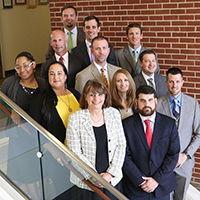 The Department of Educational Leadership welcomed a distinguished group of 12 scholars in June as Cohort One in the new Doctor of Education (EdD) in K-12 Educational Leadership. The doctoral students completed three courses in the summer and take two more classes during each of the fall and spring semesters to finish the first year of the three-year program. A second cohort will begin in June 2018.

Dr. John Wilson, program director and clinical professor of educational leadership, said the students in the cohort come from the state’s major population centers, as well as from more rural areas. “They also bring a variety of specializations to the table — ranging from science to special education to communications,” he said. “But the group began quickly to function as a team, supportive of each other and excited to build for the future.”

The students in the program were equally impressed with Baylor after their initial classes in the EdD program.

“The strength of the cohort model is invaluable,” said Mike Rockwood, director of community relations for Lamar Consolidated ISD. “Not only do you get to learn from experienced professors and superintendents, but you form relationships with people in education who have a variety of experiences and perspectives.”

“It has pushed me to think more deeply, and I am learning things that I put immediately into practice with my teachers. It has changed everything and given us more momentum.”

Veronica de la Rosa Ramirez, BA ’00, an elementary principal in Seguin, said she was eager to return to her alma mater. “The schedule works well for me as a working practitioner, since I am traveling to attend,” she said. “The professors are amazing. So are the speakers, including superintendents, former superintendents, legislators, and even a lobbyist, so we are getting an inside view from many perspectives.”

The program offers scholarship support for all students, and rolling applications are already being accepted for June 2018, with a link available at baylor.edu/EDD.
Are you looking for more News?
All NewsArchives