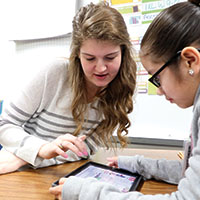 Rachel Vaughn, BSEd ’17, wants to be the teacher that she never had. She was identified in kindergarten as gifted, but she still struggled in school because of a learning disability.

“I think I could have achieved more if somebody had stepped in sooner,” she said.

But Vaughn has reached a high pinnacle of achievement anyway; she was named “Clinical Teacher of the Year” for the State of Texas by the Texas Directors of Field Experience (TDFE), the organization of faculty members within university teacher-education programs who supervise field experiences. The award honors senior-level teacher-education students and was presented at a statewide meeting this fall of the Consortium of State Organizations for Texas Teacher Education (CSOTTE), of which TDFE is a part. There were three honorees from university-based programs.

This is the second year in a row that a Baylor School of Education student teacher has won the highly competitive award. Each nominee submits a video of a full class teaching session in which they were the lead teacher, and judges watch each video.

“I’ve known I wanted to be a teacher my whole life; there was never a question,” Vaughn said. “Before I was in pre-school, I was modifying activities for my brothers. In kindergarten, I developed a behavior management plan for one of my classmates.”

Vaughn chose Baylor because she wanted to be as well prepared as possible. “Because of my own educational background, I had experiences both fabulous and not-so-great,” she said. “For college, I wanted to lean more toward the fabulous as opposed to not-so-much, and that meant Baylor’s education program.”

When Vaughn first failed spelling tests in grade school, she was told she was lazy, stupid and that she wasn’t applying herself. “It really hurt my second-grade heart, because I’m none of those things,” she said.

“I came into college worried that I wouldn’t achieve anything because I’m dysgraphic and dyslexic,” she said. “I wanted to study gifted education so I could help those students who are profoundly gifted but also hampered a little bit by a learning disability. I see no reason why children who have trouble reading, writing or spelling can’t also show how wonderfully talented they are.”

Vaughn wants to be a difference-maker for such students. “For me, it would have been so incredible if someone had told me that I wasn’t stupid or lazy and that this one thing didn’t define my life,” she said. “And then I could have played more to my strengths instead of my deficits.”

Vaughn graduated in May with a degree in elementary education with supplemental certificates in gifted education and ESL. She is now teaching second grade at West University Elementary in Houston ISD, where she intends to inspire her students to be lifelong learners.
Are you looking for more News?
All NewsArchives