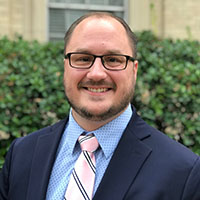 Joshua Caleb Smith is a historian of early modern European Christianity who began working at the Research and Writing Development Center in the fall of 2020. Dr. Smith channels his deep love for the written word and insatiable curiosity into helping others with their research and writing. Joshua loves to travel, whether that means visiting his identical twin brother in Hawai'i or cavorting around Europe. He is passionate about de-colonizing the history of Christianity and loves to teach and talk about different instantiations of Christianity throughout time and around the globe. He has received several fellowships and grants including a language grant from the Deutscher Akademischer Austauschdienst (DAAD). His research focuses on the way religious people employ supernatural explanations as they interpret the world around them, though he maintains interests in the history of biblical interpretation and in American Christianity. He regularly presents his research as a member of several scholarly societies including the American Historical Association, the American Academy of Religion, the American Society of Church History, and the Sixteenth Century Society, and he has publications through Brill, Routledge, and Rowan and Littlefield among others.