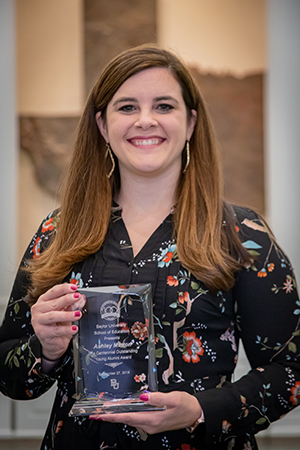 This year the Baylor School of Education honored graduates and mentors whose work makes significant, observable changes in the lives of others while exemplifying the Christian mission and ideals of the Baylor SOE. Current or former students, faculty, staff and SOE partners were asked to nominate candidates based on their ability to bring honor and distinction to the profession. A faculty committee reviewed the nominations, and the honorees were recognized in September at banquet for scholars and donors.

Minton is principal of Canyon Ranch Elementary School in Coppell, Texas, a new campus she helped open this year. She earned her BSEd in Elementary Education in 2007 with a specialization in Gifted and Talented. After graduation, she immediately began work on her master’s in Educational Psychology, also at Baylor. She graduated in 2008.

“I feel honored and humbled to represent the School of Education,” Minton said. “So many great educators are making a difference in the lives of kids because of the great beginnings they had at Baylor. “I will forever be thankful for my time at Baylor and the people I met there that will remain some of my greatest mentors and friends.”

When Minton was a teenager weighing her college options, Baylor was the only school she considered. “I knew that it was where I was supposed to be,” she said.

Dr. Krystal Goree knew Minton as an undergraduate and was touched by her energy, positivity and love. “Ashley Minton is, without a doubt, one of the most dedicated and impressive young educators with whom I have had the pleasure to work during my career,” said Goree, director of the SOE Office of Professional Practice. “Her contributions to the profession are amazing, but not surprising.”

Minton has served Coppell ISD for 12 years, first as an elementary math and science teacher and later as a district math instructional coach. Prior to being named principal of Canyon Ranch, she was the assistant principal of Richard J. Lee Elementary School. She has designed and facilitated numerous professional development experiences for educators in her school district, in the state, and nationally that focus on topics including technology, mathematics, problem-solving, vocabulary, assessment strategies, and innovative scheduling.

“She is a team player, a collaborator, a good listener, and one who is always willing and eager to contribute,” Goree said.

Originally from Jacksonville, Texas, Minton enjoys being an aunt to her nieces and nephews. “I may have been known to teach them ‘Sic ’em,’” she said. She has Baylor football season tickets and said she enjoys any excuse to make a trip to Waco. She is an active member of her church where she works in the fourth- and fifth-grade ministry. During trips to Zambia, she worked with young people as a teacher and mentored practicing teachers and administrators. She also mentors underprivileged children and families in west Dallas.

“I still credit my time at Baylor for having a major influence on where I am now,” she said. “In my time in the School of Education, I had the privilege to be mentored by Dr. Krys Goree and Dr. Susan Johnsen. They taught me so much about our wonderful profession and challenged me to be the best educator I could be. I left feeling prepared to take on my own classroom, and they have continued to support me over the years. I have since been able to hire Baylor graduates to work at my campus, and it has been a joy to have that connection with these educators and to see how well prepared they are.”