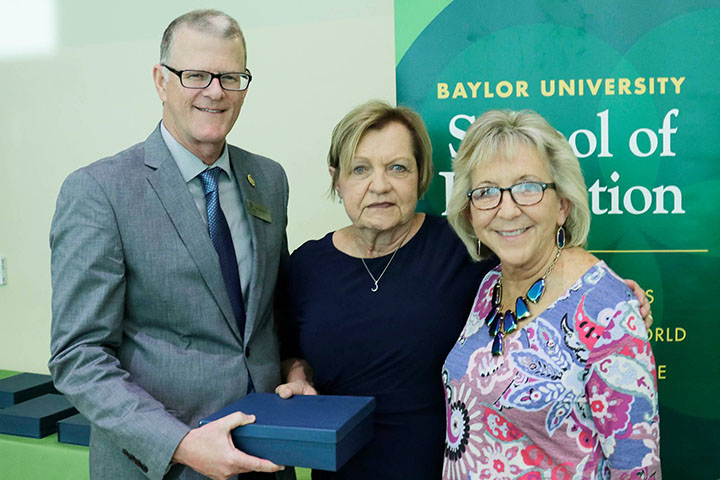 Waco kindergarten teacher Cathy Henson received the Centennial Outstanding Mentor Award – a first for the Baylor School of Education – during the SOE’s Senior Banquet on Thursday, April 25, 2019, at the Baylor Club.

“I was overjoyed that we could all come together and recognize Mrs. Henson for the impact she has made in our lives and many other previous interns’ lives,” Knight said. “Mrs. Henson has a love for Baylor and Baylor School of Education, which makes interning with her even that much more special. She has so much compassion and love for her students, co-workers and interns. I am truly blessed to know her, learn from her, and have taught alongside her this school year.”

“Many nominations were submitted for the award — and rightfully so,” she said. “Baylor University School of Education has been blessed with mentors of the highest quality during the past 100 years. Cathy has served as a mentor for Baylor student teachers/interns for the past 13 years. She was nominated for this award by numerous individuals who appreciate the positive difference she has made in their personal and professional lives. She is very special.”

A native of Teague, Texas, Henson received her Bachelor of Arts in Elementary Education from Baylor in 1973. She has taught school for 34 years — in Burleson, Marlin and Waco — and now teaches kindergarten at Parkdale Elementary School in Waco ISD, where she has been since 2005.

SOE Interim Dean Dr. Terrill Saxon surprised Henson with an announcement of the award during a morning assembly at Parkdale, attended by her colleagues, Baylor SOE professionals, Knight and her beloved kindergarteners.

“This award was a complete surprise, and I am so honored to be recognized as an outstanding mentor,” she said. Henson said that through mentoring, she also learns a lot from the Baylor students in her classroom.

“Working closely with my interns each year sparks my enthusiasm,” Henson said. “It takes me back to my early years of teaching and helps me remember the excitement and joy I felt walking into my classroom for the first time. During this opportunity as a mentor, I am able to learn new concepts from my interns and stay up to date with new ideas in the education field that Baylor incorporates in the program very well. I continue to feel that sense of responsibility for the education and growth of my students.”

Above all, Henson said she treasures the relationships she makes with her interns, many of whom still call, text, share pictures of their classrooms and send holiday greetings, wedding invitations, shower invitations and more.

Knight said that, like many SOE interns, she began her senior year with a fair amount of anxiety about who her mentor teacher would be.

“Although I did not know Mrs. Henson, every person I talked to who knew her told me how blessed and lucky I was to have her as my mentor teacher,” she said. “And after my first day observing and teaching in her classroom, I knew it was true. It has only become more evident over the school year how truly blessed I am to have the opportunity to learn from Mrs. Henson and experience her teaching. The moment I found out about the Centennial Mentor Teacher Award, I knew I was going to nominate Mrs. Henson!”

Knight graduates in May and has accepted a teaching position at Parkdale.

Carmen Rodarte, who teaches kindergarten at Parkdale along with Henson, shares Knight’s enthusiasm for her former mentor. “She goes above and beyond for her interns, offering as much advice and wisdom from her previous years as she can give and allowing her interns the freedom to practice teaching in her classroom from the get-go,” she said. “When I look around my classroom, I find so many little pieces of Mrs. Henson around, and I am positive there are many amazing classrooms that carry her legacy with them as well.”

Rodarte added, “Thank you to Baylor School of Education for placing me in Mrs. Henson’s room, because they not only gave me a solid teaching mentor, but a lifelong friend.”

Landreigh Knapp, who is currently working at a church in the United Kingdom, has plans to teach in Fort Worth upon her return to Texas. She said she was excited to have the opportunity to nominate her former mentor.

“She has such a genuine love and care for each and every student that she teaches,” Knapp said. “Not only that, she became my second mom throughout my internship. She consistently cared for me and checked in on me. I just loved spending time with her even when it was completely unrelated to classroom work. Mrs. Henson offered genuine feedback and helped me become a better teacher. She taught me consistency, sacrificial love and commitment. All three of these things are vital to teaching.”

Henson said Baylor SOE is unique in the way it prepares future teachers. “The intern year is so important because it allows the candidates to spend the year in a classroom working closely with a mentor teacher,” she said. “The experiences that are gained are invaluable because the intern has firsthand knowledge of how to begin a school year and everything else that could happen throughout a day. I have truly enjoyed serving as a mentor teacher.”

Henson and her high school sweetheart, Charles, have been married for 46 years and have three children, seven grandchildren and an eighth grandchild arriving in July.

“Mentoring isn’t only about education and applying that knowledge in the classroom, but building a relationship with that future teacher entrusted to me for the intern year,” Henson said. “Thank you, Baylor School of Education, for giving me this award and the opportunity to build relationships with some amazing future teachers.” 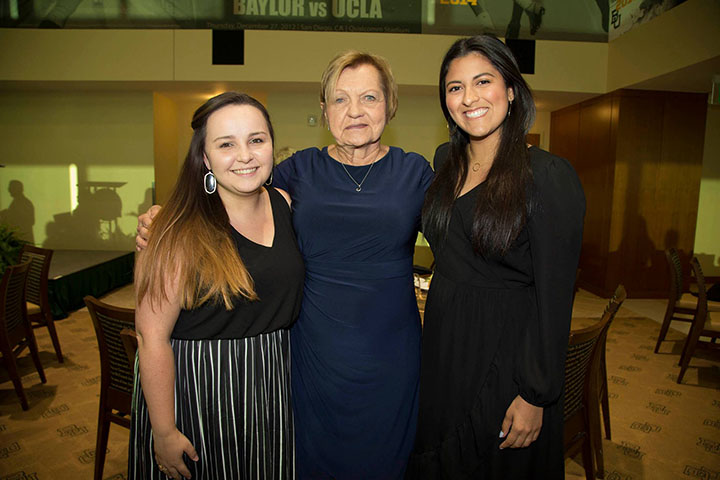 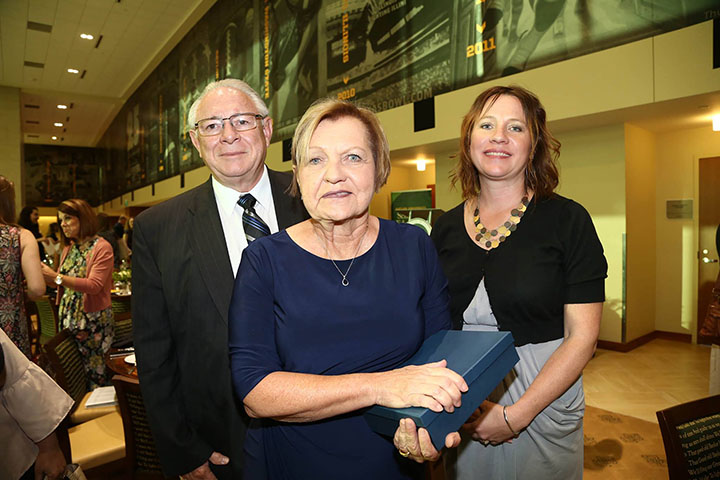