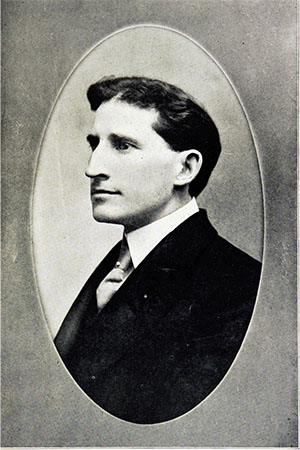 Teacher, writer and scholar Dr. Frederick Eby moved to Waco in 1900 from Chicago to teach in Baylor’s new Department of Pedagogy. He remained the department’s lone professor for nearly a decade.

Born in 1874 in the rural community of Ebytown in Ontario, Canada, Eby was the son of a physician and homemaker who raised their seven children in the Mennonite faith. When Eby was 10 he and most of his family converted to the Baptist faith, and he remained a strong Baptist for the rest of his life.

Educated in lofty circles, Eby entered the Stratford Institute at age 14 and subsequently attended McMaster University in Hamilton, Ontario, with plans to become a minister. He received a B.A. from McMaster in 1895; McMaster granted him an honorary LL.D. in 1921.

After earning his bachelor’s Eby did graduate work at the University of Chicago and earned his Ph.D. in 1900 from Clark University in Worcester, Massachusetts. That same year he married Elizabeth Newman, daughter of well-known Baptist church historian Albert Henry Newman and one of the founders of the Southwestern Baptist Theological Seminary. Eby and Elizabeth had five children.

While at the University of Chicago Eby studied under John Dewey, a famous American philosopher, psychologist and educational reformer who favored pragmatism. A devout Christian and Baptist, Eby grew to oppose Dewey's secular and pragmatic ideas on public education in favor of a more spiritual approach.

Eby taught school in Chicago before coming to Baylor. During his Baylor tenure he did postdoctoral study at the University of Berlin.

Besides promoting a spiritual emphasis in education, Eby is remembered for writing a history of public education in Texas in 1925 and again in 1954, in celebration of the 100th anniversary of its establishment. He is also remembered for helping shape the junior college system of Texas, and was often called the father of the movement, to which he would reply, "Not the father, just the babysitter!"

Some sources suggest that because of Eby's influence, Dewey's ideas and programs never became a strong part of the Texas educational system.

Eby is remembered in the 1909 Baylor RoundUp: “A man of practical wisdom; a teacher, kind and sympathetic; a true friend of the student; a Christian gentleman; and one of the foremost champions and loyal supporters of our Alma Mater.”

After leaving Baylor in 1909 Eby settled at the University of Texas in Austin and stayed there until his retirement in 1957. Eby died on February 10, 1968, at the age of 93. A memorial honoring him was entered into the Congressional Record by San Antonio Congressman Henry B. Gonzalez on May 1, 1968.