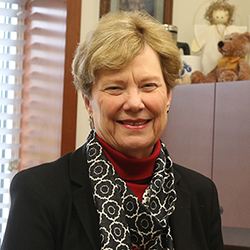 Dr. Susan K. Johnsen became an internationally known expert and innovator in gifted education as a Baylor graduate and faculty member, but things could've turned out differently — if it hadn't been for a boy.

Johnsen arrived at Baylor in the 1960s, a comfortable distance from her Dallas home — and a young man her father wanted out of her life.

"I had a boyfriend at the time, and he was going to go to SMU (Southern Methodist University), and my dad really didn’t like this boy. He (Dad) said, 'You’re going to have to choose a school that’s at least a hundred miles away from Dallas.' And because I was a little bit of a stubborn youngster, I looked on the map and found a school that was exactly a hundred miles from Dallas, and that’s how I ended up at Baylor. It was not what you’d call one of those academic, sophisticated types of choices. I just chose Baylor because of that, and I’m very glad I did."

Johnsen, Ph.D., is professor emeritus of the Department of Educational Psychology at Baylor, where she founded and directed the Ph.D. program and programs related to gifted and talented education. Her illustrious career took her far and wide - to Pittsburgh, Austin, Houston, Minneapolis, Kentucky, Ohio and back to Austin — before she was recruited in 1989 to teach at her alma mater and begin Baylor's gifted programs.

She retired in June 2018 after nearly 30 years of service to Baylor and the SOE. She is a recognized authority on gifted learning, and the tests she authored to identify gifted and talented children are used worldwide. A prominent resercher, she is the editor-in-chief of Gifted Child Today journal.

In 2014, Johnsen received the Outstanding Leadership Award from the Council for Exceptional Children (CEC), the largest international professional organization dedicated to improving the educational success of people with disabilities and/or gifts and talents. She was the first person in the field of gifted education to receive the award.

More recently, Johnsen was selected for the Ann F. Isaacs Founders Memorial Award from the National Association for Gifted Children. The award honors those who have served the profession and the association with distinction and are leaders in the field of gifted education.

Johnsen remembers her early days in Houston as some of the greatest in her teaching career and training for the path her career would eventually take. At that time, special education was her area of expertise.

"They were starting to include children with disabilities in the general education program (in Houston), so we were re-training teachers," Johnsen said. "I directed a teacher development center and 17 different schools. We developed a professional development curriculum, and eventually it was noticed nationally. And so I moved to Minnesota and directed — replicated, essentially — the program up in Minneapolis."

The evolution to gifted education grew easily from those early experiences. While in Austin, she was approached about teaching gifted education courses. "I really saw myself as a special educator. But, as I realized, there were a lot of kids — like gifted kids with disabilities, gifted kids who were poor, the area that I always focused on — and so that's how I ended up in gifted ed."

Upon coming to Baylor, Johnsen's hands-on approach was anything but ordinary, and it helped give rise to the development of Hillcrest Professional Development School, the first PDS partnership for Baylor launched in 1993.

"I think Hillcrest at that time was a very collaborative school where faculty and teachers partnered together to design programs related to personal interest and based on best practices," she said. The PDS effort has now expanded to nine campuses in Waco and neighboring school districts.

Johnsen has written three tests used in identifying gifted students. The Test of Nonverbal Intelligence (TONI-4) was her first, developed in 1982. "That was an instrument that was developed to identify individuals that really needed a total non-verbal assessment of reasoning or intellectual potential, so it could be pantomimed," she said. "And it’s used all over the world, because you don’t really have to know English to be able to take it. It’s sort of a problem-solving test."

Other tests followed, she said, because "there weren't really very many good tests for identifying gifted kids. Most tests were designed for general populations. And I wanted to design one that was a little more difficult, that would go into the upper ranges."

While in Ohio, she developed the Screening Assessment for Gifted Elementary and Middle School Students (SAGES-3). She used smart local children as reviewers. "One of them happened to be a neighbor, and he would come over and review my items, and he could destroy them in a flash. He was very good."

Johnsen has updated the SAGES-3 three times, as recently as late 2018. She also co-authored the Test of Mathematical Abilities for Gifted Students (TOMAGS) and is currently working to identify a new national definition in gifted education that everyone can rally behind. "It is a task," Johnsen said.

In 2002 Johnsen left her role as Associate Dean of Scholarship and Professional Developement because "my first love is teaching, and I could see that the longer I stayed there ... I would be involved in so many things I wouldn't be able to do teaching."

On the horizon, she is excited about a Baylor SOE program to train teachers to handle twice exceptionalities, or gifted students with disabilities, perhaps the only program of its kind nationally. "There's been great momentum in that area, so I think our timing is very good here at Baylor to start a program for our students.

She is also encouraged by the M.A.T. program which offers a joint bachelor's and master's degrees with certification for students outside of the School of Education, as well as offering a stand-alone master's for graduates from other universities.