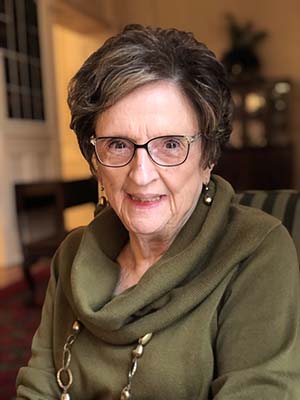 When Dr. Anita Baker moved to Waco in 1976 for her husband’s new job at Baylor, she was certain she’d have her own classroom in no time. After all, she had a bachelor’s degree in early childhood and elementary education and had already taught public school for two years in Tennessee.

“I thought, ‘I’m going to move to Texas, and I’m going to teach third grade and I’m just going to be happy as a pea in a pod', but that didn’t work out,” she recalled. “There were no teaching jobs available at that time.”

One afternoon, as she was settling in to her new home in Waco, the phone rang. It was her husband, Eugene.

“He called and said, ‘Have you washed your hair today?’ And I was unpacking, and I didn’t think that was any of his concern. He said, ‘You have an interview this afternoon with the dean of the school of education (at Baylor). They want to talk to you.’”

She was dumbfounded. She never imagined herself teaching higher education.

“They needed somebody to supervise the students as they worked in the model classroom, giving feedback and helping them plan,” Baker said. The new, state-of-the-art model classroom was in the Draper Academic Building, built especially for training future teachers.

She met with Dr. L.V. McNamee, dean of the SOE, and was impressed. “I thought it was ‘It on a Stick,’” she laughed. “Compared to what my training had been, and seeing the opportunity that the Baylor students had to get some hands-on (training) with children and learn about how they learn, it was a fantastic opportunity, and I was glad to be a part of it.”

For 33 years Baker taught elementary curriculum and instruction, freshman study skills and much more. "It obviously was a good fit," she said. "I think God opens doors, and God closes doors. At that point he closed the teaching door, but he opened this one at Baylor.”

Marie Messer, a library media specialist in Florida now in her 22nd year of teaching, still keeps in touch with Dr. Baker. "There wasn't a single thing in that class (curriculum) I didn't use my first year of teaching. [Baker] taught us true learning happens when you are DOING."

The new Draper Academic Building was designed to be the “epitome” of what a classroom should be, Baker said. Waco ISD students would be brought to Baylor and spend part of the morning in the model classroom alongside undergraduates getting their kindergarten endorsement. During the course of a year, Baker and her students tried to invite every kindergarten class in the district. Occasionally, they brought in children with special needs, too. 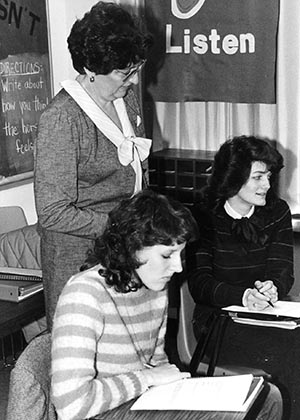 “It was the beginning of hands-on coursework,” she said. “Back then, students took education courses freshman year and their senior year was spent student teaching. That was the only hands-on they did, I think.”

It prompted her to think about ways to get Baylor students into real classrooms sooner.

“I taught a Language Arts class, and I had a neighbor who was teaching third grade. I said, ‘How would you like to have some Baylor students come and work with you in planning some language arts activities?’ We went in, and we planned activities in math, science, social studies, language arts. Then we gave it to the teacher and she gave us feedback on how it went."

That feedback was invaluable, and it laid the groundwork for what Baylor SOE offers today: classroom experiences that begin during freshman year. “Not to say we weren’t training them well, but we just felt like there was maybe a better mousetrap we could build," Baker said.

Eventually, at the urging of Dean Bill Lamkin, Baker went on to earn her master’s and Ph.D. “He was very, very supportive," she said. "He just encouraged me.”

Then, after having been out of the classroom for 13 years, Baker made a move that took her colleagues by surprise: she returned to second grade.

She approached a teacher at Cedar Ridge Elementary in Waco with 20-odd years of experience. “I said, ‘How would you like to come and work on campus at Baylor and let me take over your class?”

Baylor and Waco ISD worked out a plan to put Baker in second grade class for a semester while the Waco ISD teacher worked with Baylor students. “It took guts for that teacher to let me have her classroom for a semester because she didn’t know what she was walking into,” Baker said. “She was good for the Baylor students because she supervised student teaching for the semester.”

The experience, Baker said, was career changing. “I learned so much about what I didn’t know and what I was needing to change about what I was teaching at the university,” she said. “It was an 'Ah-ha' moment, that whole semester.”

Back at Baylor, she started a conversation about making changes to the SOE curriculum. “I felt like what I had done in the classroom helped me articulate what we might need to start doing with our elementary certification people,” she said.

Teaching has changed a lot since Baker’s early years in a Tennessee classroom, but one thing hasn’t, she said:  Good teachers — the ones who stick with it and love it — feel a calling to be in the classroom.

“When I graduated high school you [women] could be a nurse, a teacher, a secretary or a mom,” she said. “Women didn’t have the choices. I had friends who taught 20, 35 years in the classroom, and they were so unhappy. But they didn’t know anything else to do.”

Her advice to anyone considering teaching as a career choice? Do some serious soul searching first. “It’s not just a job. It can’t be. If it is, you are going to be miserable, and so will the kids. You just have to feel it. I have since I was 13, and here I am 80 and still feeling it. I can’t imagine not being with kids at some point.”

In 2009, Baker decided it was time to retire. “I just felt like I had done what I wanted to do, I made the contribution I wanted to make, and it was time for somebody else to do what they needed to do. I retired in ’09 and I don’t know that I’ve been bored since."

A year later she was approached about teaching Children’s Literature at Tarleton State University. Today, she mentors children through Kids Hope USA at Brook Avenue Elementary in Waco and is an ESL Instructor through Neighbors International, a program administered through Waco's Columbus Avenue Baptist Church. She is known to drive far and wide to read to youngsters in Waco and elsewhere. "Have books, will travel,” she joked.

"Dr. Baker is everything Baylor espouses — honesty, integrity, service, and a love of God's people," Messer said. "I just wish I worked closer. I'd have her come read aloud every day. She doesn't just talk about a subject, she exudes it! ... I am forever in her debt, as are thousands of her teachers and millions of their students."

Baker remains grateful for every day she's had in a classroom, whether she was teaching young children or undergraduates.

“You gotta be willing to go through whatever door opens," she said. "So I didn’t teach eight-year-olds – I taught 20-year-olds. I just never saw myself working at this level and having the opportunity to influence the lives of so many – mostly – young women. It was something I never expected. I firmly believe that God opened this door for me.” 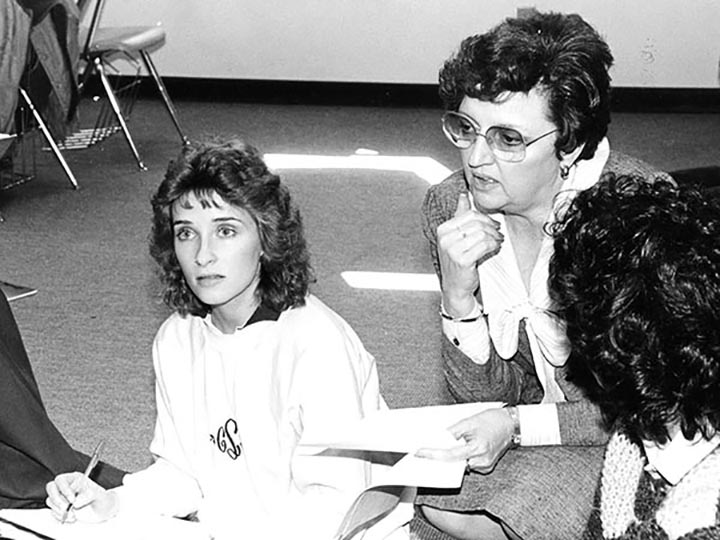