Second Home of the School of Education 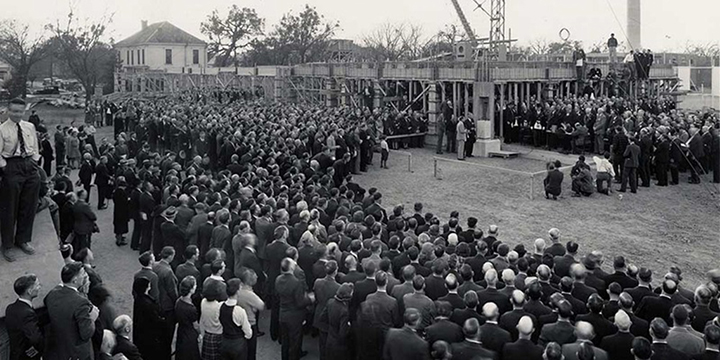 The second home of the School of Education was Baylor's iconic Pat Neff Hall. The SOE moved from Burleson Hall into Pat Neff Hall in 1939. When the SOE moved into Pat Neff in 1940, the new, significant building housed a projection room and a photographic dark room. Initially, a summer class was taught in audiovisual education along with a course to help public school officials select, organize and supervise audiovisual education, an exciting new trend within the public schools.

Today, Pat Neff houses the highest offices at the university - including the president herself - and is no doubt one of the most photogenic buildings on campus. Eighty years ago today - Dec. 7, 1938 - the building was “born,” when the cornerstone was laid in a ceremonial event.

Baylor’s enrollment at the time was booming, even amidst the Great Depression. This was great news for the university, but led to overcrowded classrooms and lack of faculty space. Thankfully, the General Education Board, a New York-based philanthropic organization dedicated to supporting higher education institutions, offered $50,000 for the construction of an administration building to free up classroom space.

And so, construction on the new building - eventually named Pat Neff Hall, in honor of the president who saw the university through the country’s most difficult economic struggle - began, celebrated with the cornerstone-laying ceremony mentioned above. Designed by the Waco architectural firm Birch D. Easterwood and Son, the 46,000-square-foot, American Georgian-style building was completed in 1939 at a total cost of $250,000, and dedicated on the next Baylor Founders Day, Feb. 1, 1940.

"It was warm because we were up on the third floor, and I remember that we did have to walk up all those stairs to get up to our classes," recalls Susan K. Johnsen, professor emeritus in the department of Educational Psychology. "The classes were very traditionally arranged with the old-type chairs that had the arms on them, and, of course, just the chalkboard was the primary teaching tool that was used along with your books, so very traditional instruction."

If you look closely, you’ll see some of Pat Neff’s favorite quotes on all four sides of the building: “Wisdom is better than rubies”; “The youth of a nation are the trustees of posterity”; “The preservers of history are as heroic as its makers”; and “Thy word is a lamp unto my feet.” The infamous shining dome, which originally had a silver hue, was only the second stainless steel roof in the country. (Lights were installed in the tower in 1978, beginning the tradition of lighting the tower green to celebrate a Baylor victory, and the now-familiar gold leafing was added to the dome in 2000.)

Inside, in the center of the first floor, you’ll find a 1939 version of the Baylor seal - then newly redesigned per President Neff’s recommendations. Designed by Baylor student Enrique Ramirez, the seal is now roped off to prevent further damage. At the top of the building was the hall’s original carillon, the Cullen F. Thomas Carillon. Installed at the end of construction, the chimes rang out for the first time on Dec. 21, 1939, with “Praise God From Whom All Blessings Flow.” Those bells would last almost 50 years before being replaced in 1988 with the current McLane Carillon. 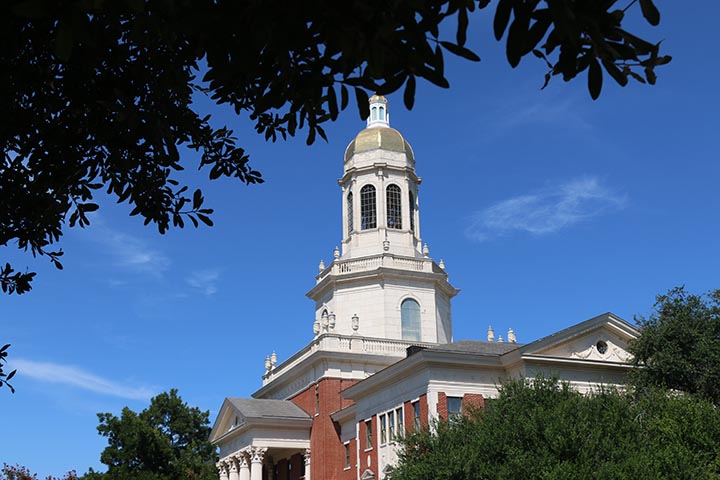