This year we celebrated Baylor School of Education graduates and mentors whose work makes significant, observable changes in the lives of others and exemplifies the Christian mission and practices of the SOE. 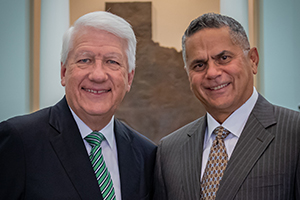 Waco native Dr. Robert Duron (pictured, right) was recently honored with the Centennial Outstanding Alumni Award. Having grown up a block away from Baylor’s Floyd Casey Stadium, Duron said he never dreamed he would earn a degree from Baylor. The son of factory laborers who valued education, he said his journey is proof that God worked through others — and Baylor — to make his success possible.

Duron has 32 years of public education experience and has held significant leadership roles. He is currently the Associate Executive Director of Governance Services for the Texas Association of School Boards, which provides training, consulting services, productivity tools, research, and direct support to school districts and school board members. He served as superintendent of the San Antonio and Socorro (El Paso) Independent School Districts and then as Deputy Commissioner for Finance and Administration for the Texas Education Agency.

Baylor’s Dr. John E. Wilson (pictured left), Clinical Professor and Program Director for the Doctor of Education in K-12 Educational Leadership, said he had the privilege of hiring Duron as his assistant superintendent when he worked as superintendent of Clear Creek ISD. 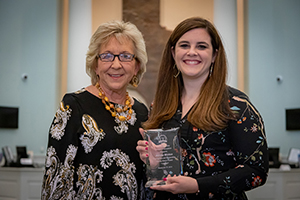 Minton (pictured, right) is principal of Canyon Ranch Elementary School in Coppell, Texas, a new campus she helped open this year. She earned her BSEd in Elementary Education in 2007 with a specialization in Gifted and Talented. After graduation, she immediately began work on her master’s in Educational Psychology, also at Baylor. She graduated in 2008.

Dr. Krystal Goree (pictured, left) knew Minton as an undergraduate and was touched by her energy, positive energy and love. “Ashley Minton is, without a doubt, one of the most dedicated and impressive young educators with whom I have had the pleasure to work during my career,” said Goree, director of the SOE Office of Professional Practice. “Her contributions to the profession are amazing, but not surprising.” 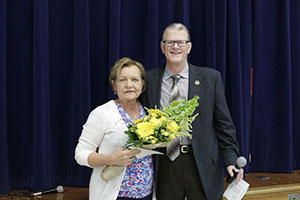 A native of Teague, Texas, Henson received her Bachelor of Arts in Elementary Education from Baylor in 1973. She has taught school for 34 years — in Burleson, Marlin and Waco — and now teaches kindergarten at Parkdale Elementary School in Waco ISD, where she has been since 2005.