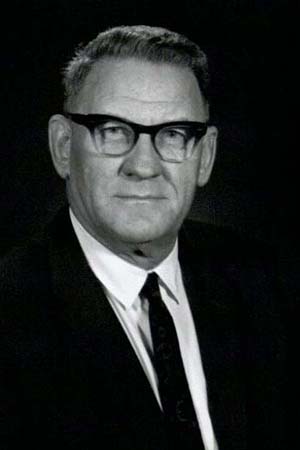 A native of Harrisburg, Ohio, Goetting earned a Master’s and Ph.D. from Ohio State University. He accepted a teaching position at Baylor in 1935 after having taught at Oklahoma Baptist University.

Goetting’s specialty fields were administration and secondary education. Prior to becoming dean, he directed the writing of three of the six dissertations for the doctorate degrees, and Baylor SOE granted its first three doctorate degrees in 1955. While dean he also taught as many classes as his administrative duties would allow.

For many years Goetting administered annual tests to all students in the McLennan County public schools. He reportedly spoke often of the challenges facing small, rural schools. With his own money, he established a film lending library for rural schools in McLennan County and provided religious films for local churches from this library. When the Region XII Education Service Center was established in 1968, Dr. Goetting’s film collection served as the basis of their film library.

Goetting also assisted the Texas Education Agency in reviewing the schedules for the advanced certificate programs from Texas colleges and universities and was considered one of the state authorities on all certificate laws. He also assisted with the Teacher Placement work on the Baylor campus. He was the only member of the SOE faculty to write a textbook used by other universities. His book, Teaching in the Secondary School, was a widely used by other universities.

As professor and dean emeritus, Goetting was recognized in 1972 for his many years of service.

“He was just such a special man,” remembers Darlene Kyser, who in 2017 celebrated 50 years in the SOE as an assistant to the dean, a communication specialist, and a member of the faculty search committee. “He helped numerous graduate students who were full time working – taking courses and teaching. Their stipend was not real large, of course, but they did get the tuition, and that’s what they came for, for their coursework. But I observed his help many times, financially helping those students. He had a very gruff exterior but a heart of gold. Just a wonderful man.”