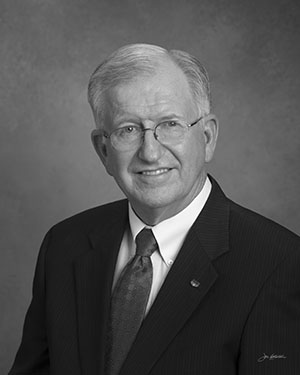 Dr. Jon M. Engelhardt served as dean of Baylor's School of Education from 2007 until 2015.

A professor of Curriculum and Instruction, Engelhardt is described as a visionary academic leader, researcher and consensus builder who oversaw significant SOE growth. He helped strengthen and expanded the SOE's professional development school network while organizing an award-winning collaboration between the SOE and area public school superintendents, the Greater Waco Area Superintendents.

Engelhardt played a pivotal role in establishing a partnership between Baylor and Baylor Scott & White Health to open a center for children with autism, the Baylor Center for Development Disabilities. A Vietnam veteran, he also helped develop the university-wide support program Baylor VETS (Veteran Educational and Transition Services).

Engelhardt is the author of many scholarly articles and four books on math education, including diagnostic-remedial approaches to teaching and learning mathematics. He served on national boards for teacher preparation (AACTE and CPED) as well as Educational School accreditation (NCATE, now CAEP) and chaired a national representative organization (ACSR) in support of state associations of Education Schools.

Englehardt led major developments in redefining teacher education as a clinical enterprise—both nationally and at Baylor—and received a variety of recognitions, including the Distinguished Administrator Award for Higher Education from the Arizona School Administrators Association. He worked to develop an understanding of how SOEs are part of the systemic development and improvement of preK-12 public education and the critical nature of community support for schools.

In honor of his achievements and service to education, the Texas Association of Colleges of Teacher Education (TACTE) presented him the Robert B. Howsam Award in November of 2015.

“Jon elevated the School’s profile within the university, the state, and at a national level because of his experience and his influence in all of those arenas,” said Dr. Douglas Rogers at the time of Engelhardt's retirement. "The Howsam Award is presented only on occasion and recognizes individuals who have exhibited exceptional leadership at state and national levels, have made significant contributions to educational spheres, and have a long and enduring history with teaching."

Prior to the Baylor deanship, Engelhardt served for 20 years as an education dean at the University of Texas El Paso, Northern Arizona University, and Wichita State University. He also served as a faculty member in Mathematics Education and as an administrator at Arizona State University for 16 years.

Engelhardt received his Bachelor’s and Master’s degrees in Music and Math Education from Arizona State University before earning a Ph.D. in Mathematics Education from the University of Texas in 1972. He began his career as a middle school math teacher in Tempe, Arizona, and served for seven years in the military during the Vietnam era.