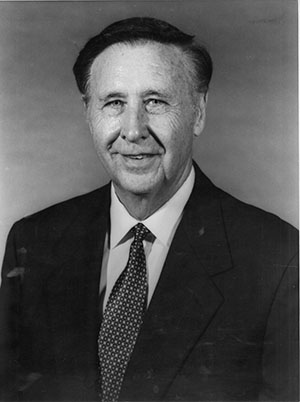 James Williamson, Ed.D., served as interim dean of the School of Education from 1996 until 1998.

Williamson joined the Baylor faculty in 1990 after serving as professor and dean of the College of Education at East Texas State University in Commerce, Texas. When appointed interim dean he was the Fred and Edith Hale Endowed Professor in Educational Leadership and Policy and chair of the Department of Educational Administration at Baylor.

Established in 1991, The Fred and Edith Hale Professorship and Hale Center for Educational Leadership and Policy serve to foster research into educational leadership and translate it into preparing leaders for educational settings, whether in primary and/or secondary schools or in higher education.

Williamson graduated from Baylor in 1957 and earned his Master’s and Ed.D. degrees from the University of North Texas in Denton.

While at Baylor, Williamson worked closely on the establishment of a professional development school at G.L. Wiley Middle School in the Waco Independent School District. He devised a much lauded concept in which students from various fields - including the schools of education, nursing, and social work - participated in professional training at the campus.

In 1998, Williamson began a sabbatical during which he conducted an international summer institute in Europe for Baylor doctoral students in the Department of Educational Administration. He also served as a Scholar-in-Residence at the Baptist Joint Committee on Public Policy in Washington, D.C. He returned to the Baylor faculty a year later.

“I’ve always known I wanted to be a teacher,” Dr. Williamson said in an interview during his tenure. His desire was that every Baylor education student “catch the vision of what a teacher can do to change the future and to touch eternity.”